PHARMACY AND TECHNOLOGY OF ORGANIC SUBSTANCES

1941 Evacuation of the Department “Technologies of organic synthesis” together with the Institute to the city of Kemerovo. Two students were transferred to the specialty “Technology of Basic Organic Synthesis”, which, at the outbreak of the war, were sent to the Military Chemical Academy.

June 1944 The Department together with the Institute returned to its hometown. With the return, a difficult period of the Institute reconstruction destroyed during the war years started.

November 1944 The order of the institute №156 from 6.11.44 marked the successful work of the Department “Technologies of organic synthesis” in preparation for the new school year.

1945 The first issue of engineers-technologists in the specialty “Technology of basic organic synthesis” in the number of 5 people. One of the graduates was a Polish citizen, later the Director of the Department of Hard Chemistry in Poland – Leon Zemczak.

1946 The second issue of engineers-technologists on the specialty “Technology of basic organic synthesis” in the number of 9 people, four of which – Kotsyuba, Plit, Chertok and Zhuk (Chebrikova), for many years worked as teachers at the Institute. The leader of all diploma projects was one of the first post-war teachers of the Department – Petrusha E.A.

1949 The Department of “Technologies of Organic Synthesis” was headed by Professor Oleksandr Efimovich Kretov. Under the direction of professor O.E Kretov, a laboratory workshop of a technological nature was created, in the organization of which the staff of the Department took part – Ye.R Chertok, G.E. Krakovetseva. and V.I.Ragozina.

1950 E.D. Radchenko graduared from the Department – the future Hero of Socialist Work, director of the Angarsk oil refinery, and then director of the Research Institute of Oil Refining in Moscow.

1952 The Department “Technologies of organic synthesis” was headed by Professor Sergei Ivanovich Burmistrov, invited to the Institute from Ivanovo. During the management of S.I. Burmistrov, much attention was paid to the development of research in the field of chemistry of quinonimines, sulfamides and fluorenten. At that time, the preparation of PhD at the postgraduate studies began, which was being run in addition to the head of the Department, by assistant professors of the Department K.O. Cervinsky (hereinafter referred to as the rector of the Chernivtsi University), M.I. Shenbor, Ye.A. Titov, V.I. Markov and V.L. Dubina. Prof. S.I. Burmistrov – one of the organizers of the problem laboratory, the head of the Department of chemicals for polymer materials. At the Department, in addition to basic research on alkylation of nitrogen-containing compounds, actively engaged in technological development of the creation of new domestic, thermo- and light stabilizers. Thus, the technology of the new thermostabilizer of the tire cord H-1 was developed and its industrial production was organized at the Rubizhne NP “Krasitel“.

1971 Introduction to the production of nylon cord produced by the Chernigiv Synthetic Fiber Plant, a thermostabilizer H-1, developed by the staff of the Department under the guidance of prof. S.I. Burmistrov. This invention allowed a significant lengthening of the life time of automobile tires.

1979 The Department was headed by Dr.ch.sc. Professor Viktor Ivanovich Markov. During his management, the Department finally formed its present state. The development of the department was noticeable not only due to the growth of the number of specialists that were annually issued, but also in expanding their profile.

1988 Students got an opportunity to acquire one of the specializations of the specialty “Chemical technology of organic substances”:

– technology of surfactants and synthetic detergents.

1994 The Department of “Technologies of basic organic synthesis” organized training of specialists in the direction of “Industrial Pharmacy”.

Since 2005 The Department is headed by Dr.ch.sc. Professor Oleksandr Vasyliovych Kharchenko.

The Department has changed its name from “Basic Organic Synthesis Technologies” to “Chemical Technology of Organic Substances and Pharmaceuticals”.

2010 The Department celebrated its 70th anniversary.

Department of Organic Chemistry was founded in 1925 on the basis of the Chemical Department of the metallurgical faculty of the Mining Institute, its head being Professor Yu.V. Korshun until 1930. At that time, the staff of the Department worked on the issues of chemistry of heterocyclic compounds, including compounds of the pyroline series.

In 1930, the Department was headed by the doctor of chemical sciences, professor P.A. Bobrov; from 1931 to 1938, it was headed by a candidate of chemical sciences, associate professor Ye.S. Wasserman, in 1938-1941 years – by doctor of chemistry, professor I.O. Trefiliev. V.A. Aleksieieva, M.I. Savin, M.S. Rovinskyi, R.I. Dubrovska, K.M. Rafalovich, G.I. Beskina worked at the Department in those years, having started their work as teachers and then continued working as associate professors. The scientific direction in those years was focused on the problems of synthesis of semi-finished products and dyes based on coke-based raw materials. From 1938, the department was engaged in chemical processing of plant raw materials.

In 1941-1951, the Department was headed by the candidate of chemical sciences, assistant professor M.I. Savin. In addition to the educational work at the Department, special tasks of the defense enterprises of the city of Kemerovo were fulfilled in that perid. In 1952 – 1953, the Department was headed by the doctor of chemical sciences, professor V.G. Panasiuk, and from 1953 to 1965 it was headed by a Doctor of Chemical Sciences, Professor O.E. Cretov. During the period from 1953 to 1965, the research work of the Department under the direction of Professor O.E. Kretov was associated with solving important industrial problems in developing the optimal technological parameters of methods for the synthesis of monomers, as well as derivatives of cyanides, maleimides, and the like. At the same time, a group works at the Department, and then a branch laboratory under the direction of Professor V.G. Panasiuk for the chemical processing of plant waste from agriculture. 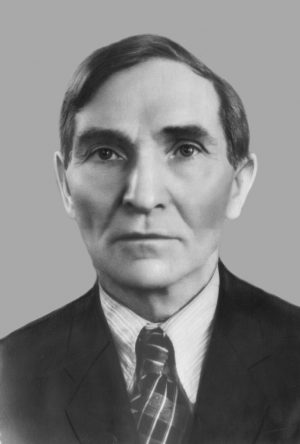 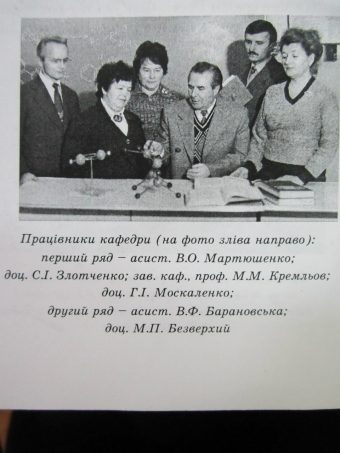 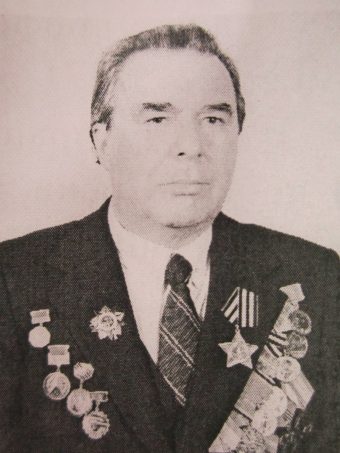 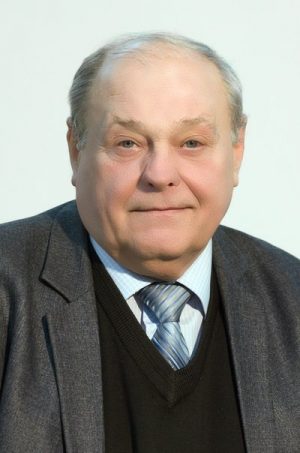 In the period from 1965 to 1997, the general scientific direction, under the direction of Professor M.M. Kretov, was the study and development of the reactions of aresulfonylamidation and aresulfonyliminating hydrocarbons, the reaction of sulfinamidine condensation in the oxidation of aresulfonyl-dichloromidine compounds, which are prone to thion-thiol tautomerism. 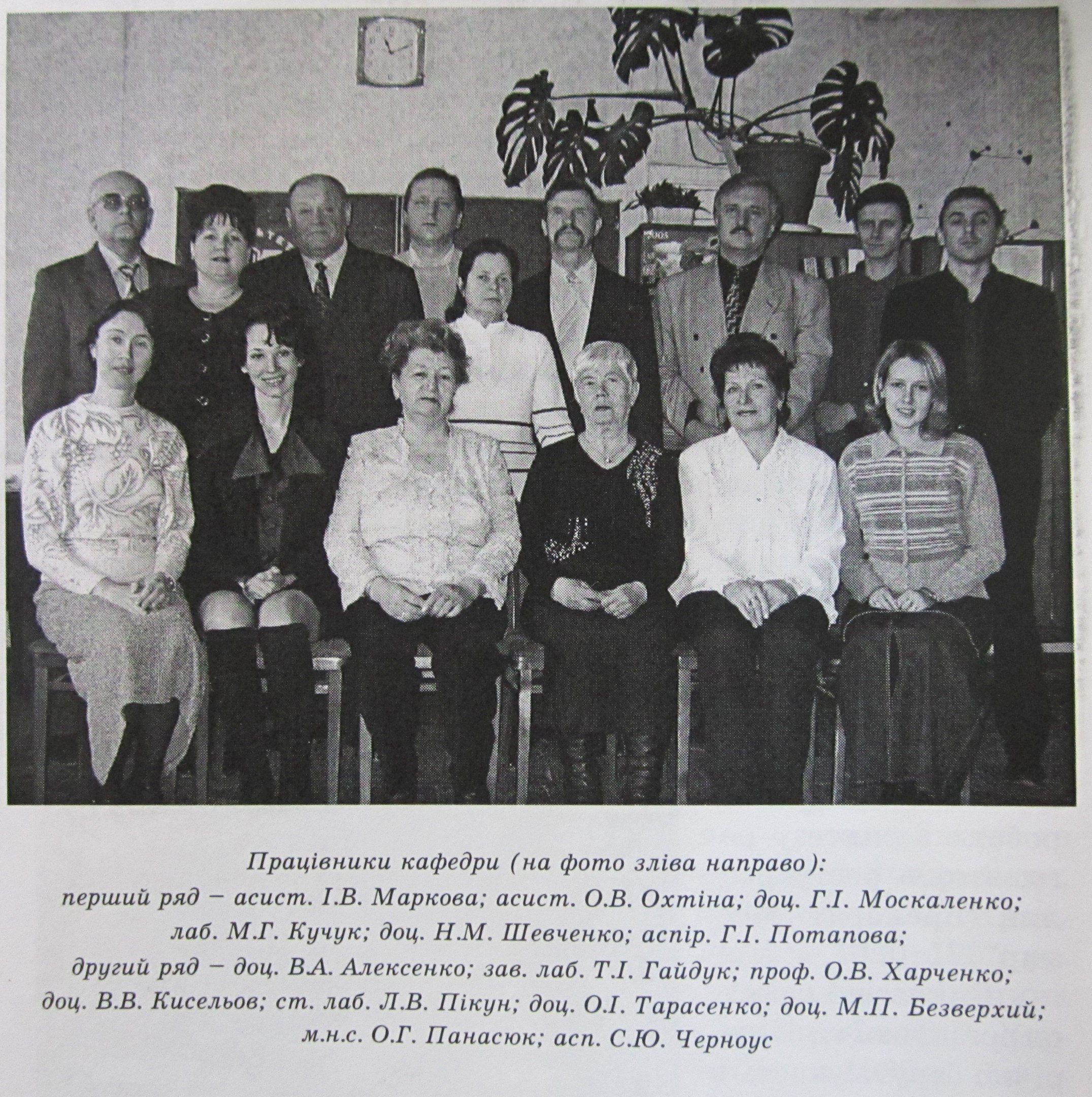 Modern scientific subjects of the Department are connected with the synthesis of new biologically active derivatives of nitrogen and sulfur-containing heterocyclic compounds, studying their reactivity and possible practical application. Under the direction of Professor O.V. Prosianyk, not only scientific fundamental research related to the synthesis and study of the configurational stability of the nitrogen atom in organic compounds are carried out, but also important practical work on the synthesis of plant growth regulators (drug “Fumar”).

Teachers of Department of Organic Chemistry participate annually in the “School of Young Chemist”, which was established by PhD M.S. Rovenskyi in the early 60’s at the Department.

Under the direction of professors A.P  Ranskyi and O.V. Kharchenko, a scientific direction in the synthesis of new acyclic and heterocyclic sulfur and nitrogen-containing compounds and complex compounds on their basis is actively developed, as well as new biologically active substances and additives that improve the performance of various hydrocarbon materials.

Since 2009, O.V. Prossianyk is the head of Department of Organic Chemistry at SHEI USUCT. 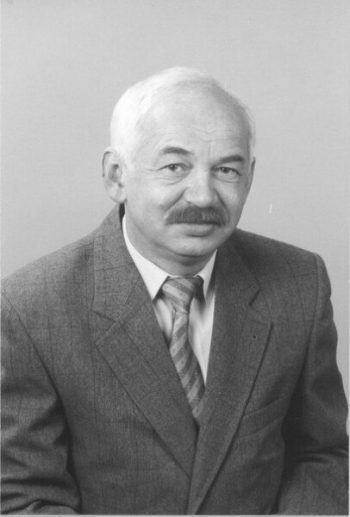 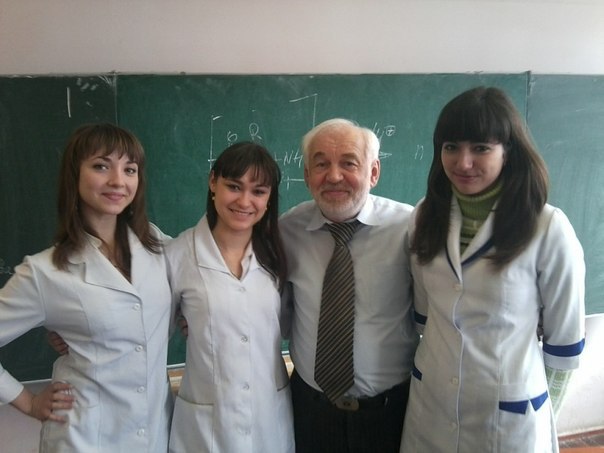 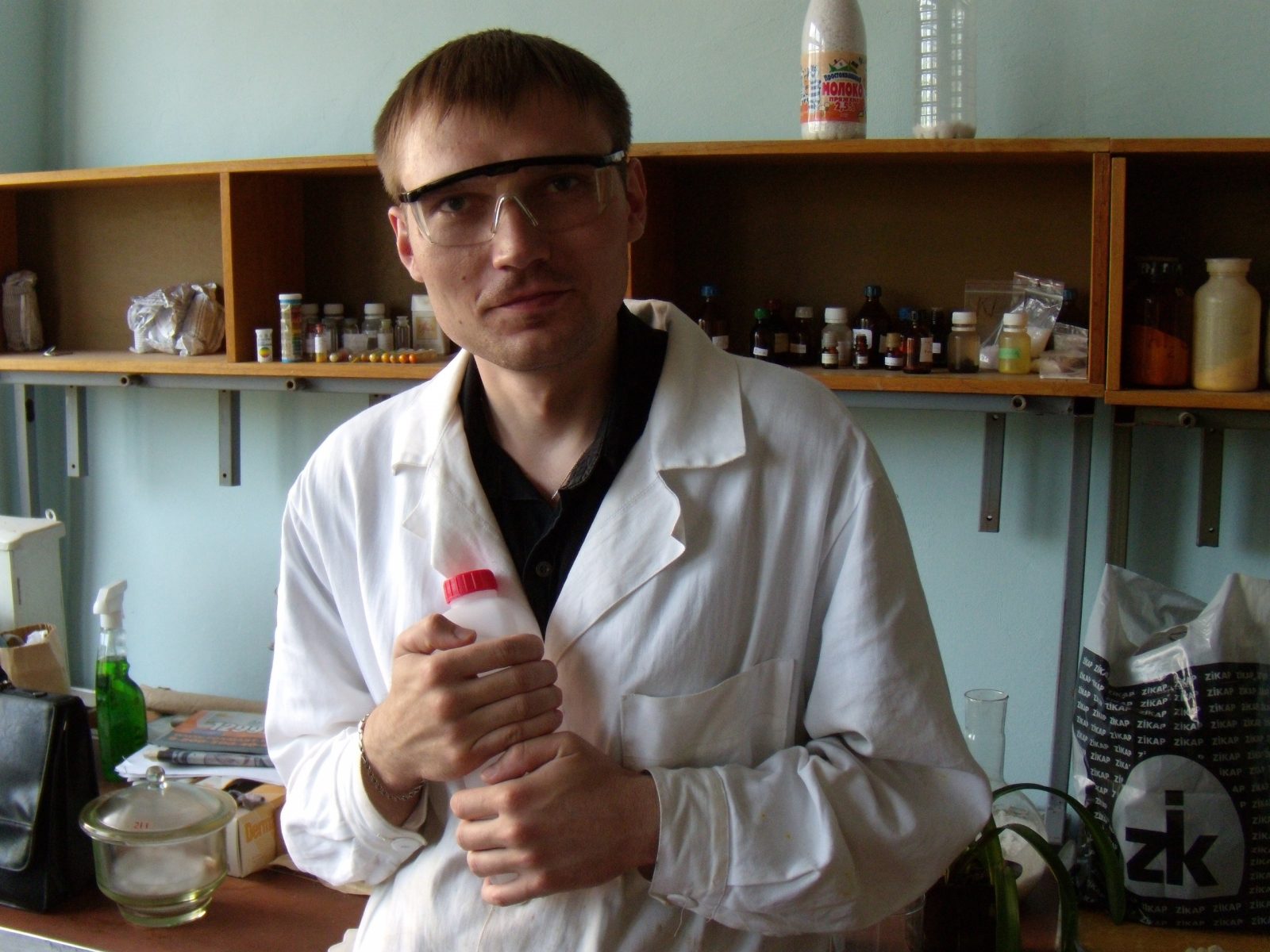 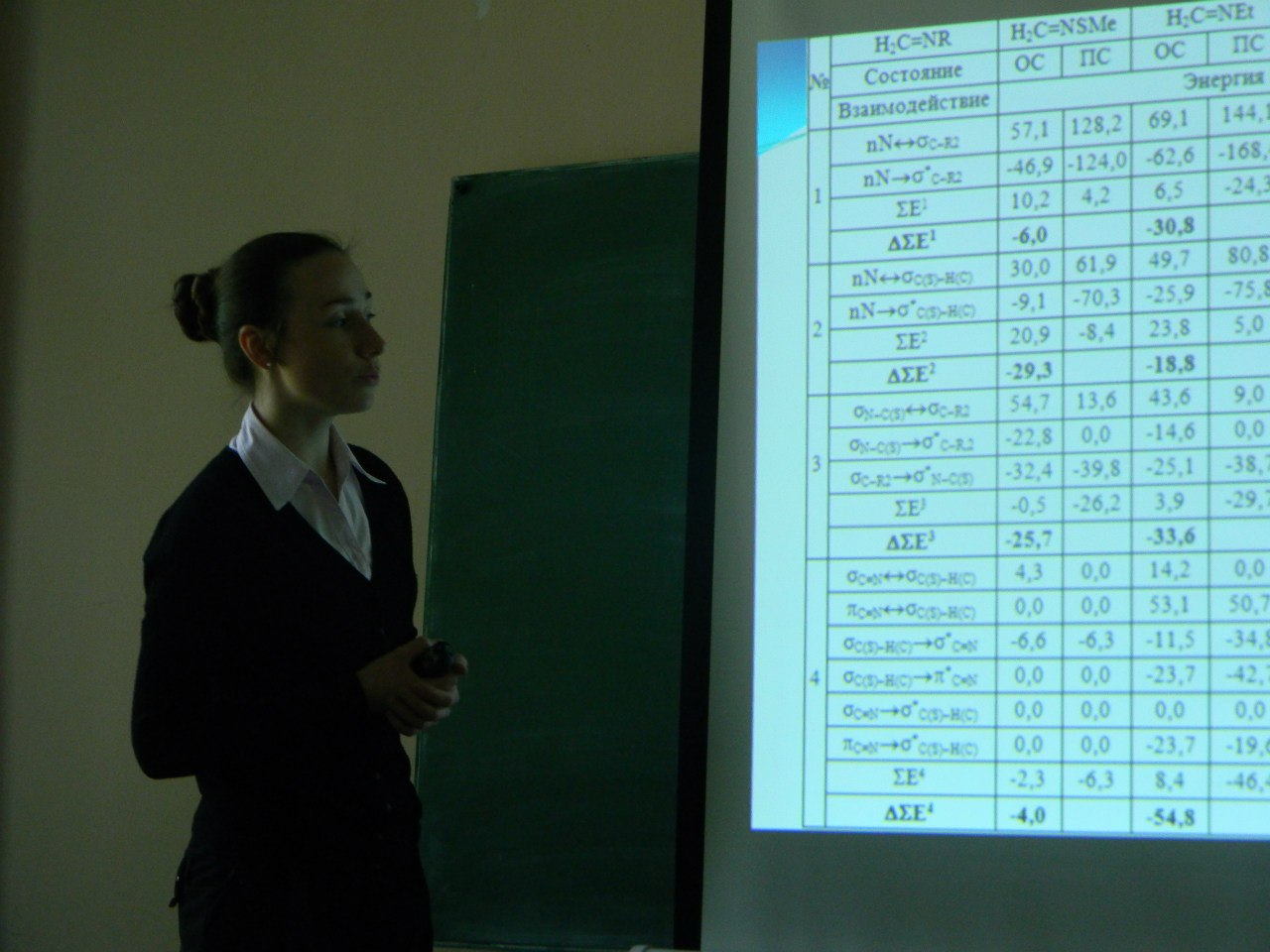 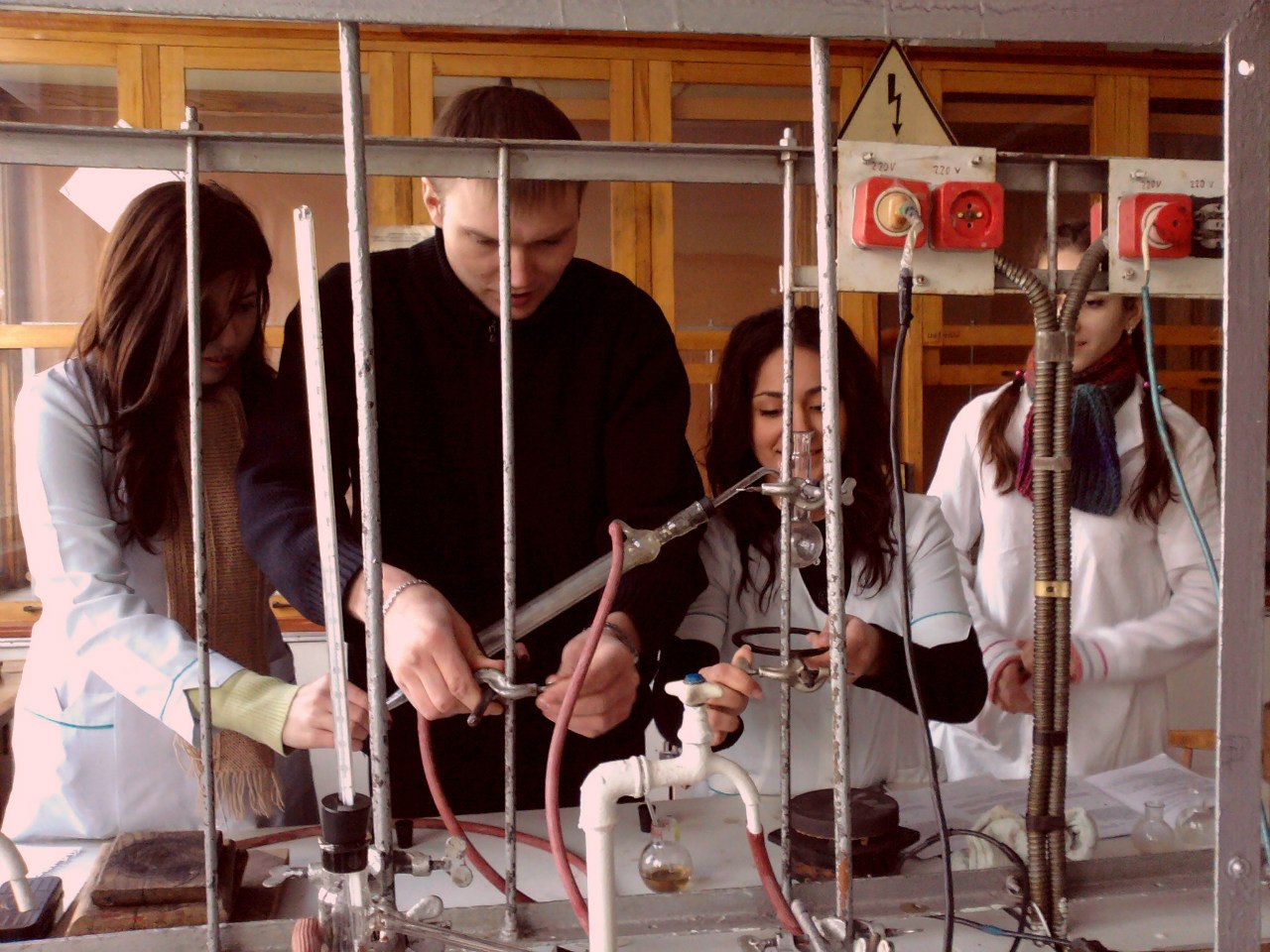 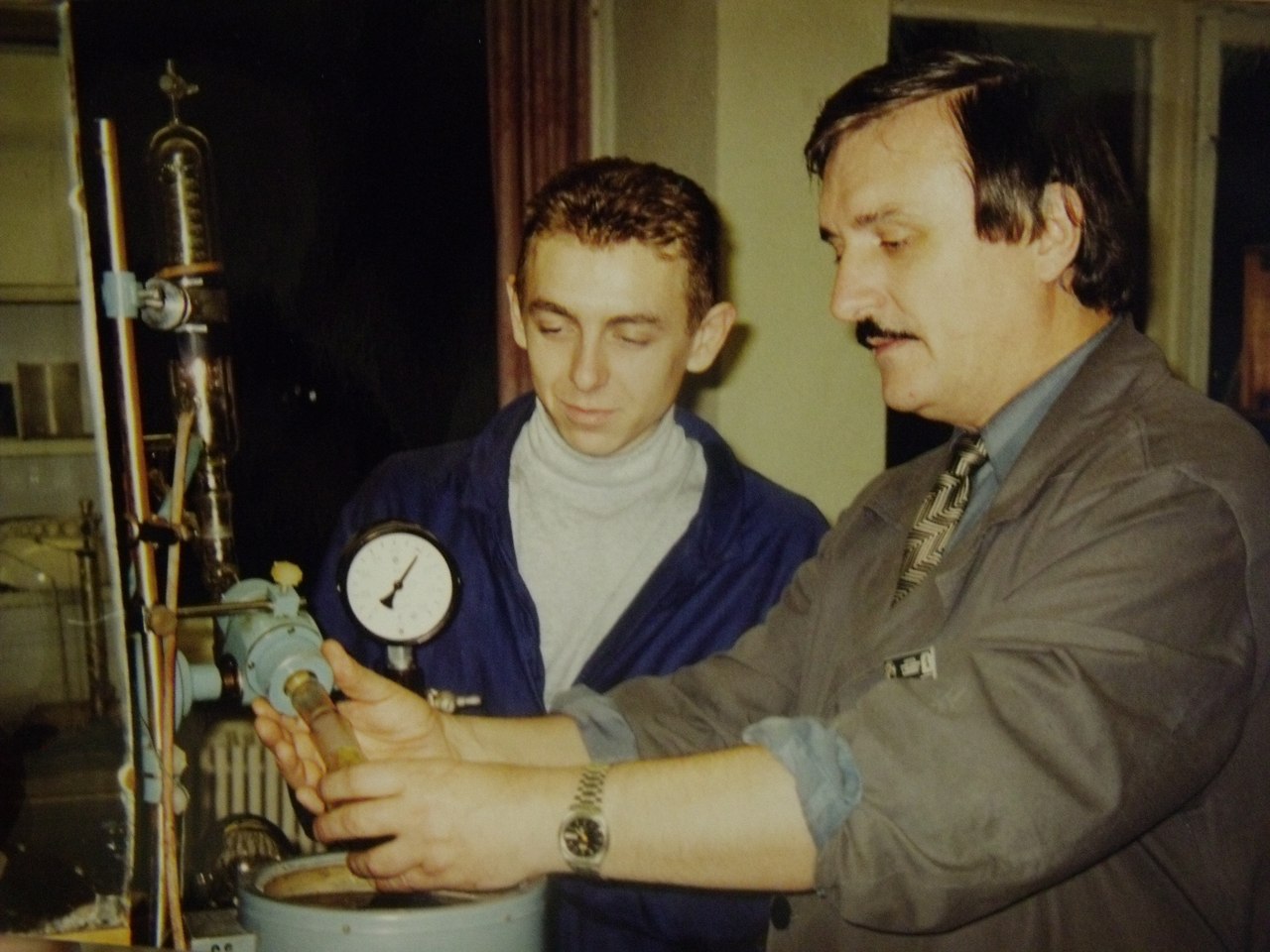