Since 1922, the scientific life of Yekaterinoslav physicist-chemist has concentrated on the created by Lev V. Pisarzhevskyi Research Department of Electronic Chemistry, where the foundations of a fundamentally new field of chemical science, which covered all the directions of modern general and physical chemistry: the theory of chemical bonding, chemical thermodynamics, kinetics, catalysis and electrochemistry.

In 1930, thanks to the efforts of L.V. Pisarzhevskyi, O.I. Brodskyi and other prominent scientists, on the basis of the Chemical Faculty of the Mining Institute, the Dnipropetrovsk Chemical-Technological Institute (DCHTI) was founded, and the Department of Physical Chemistry at the Institute of Physical Chemistry was headed by prof. Olexandr I. Brodskyi. In pre-war years, the main scientific direction of the Department was chemistry of isotopes. Under the guidance of O.I. Brodskyi,for the first time in the USSR, samples from heavy water were obtained, the general theory of fine fractionation and separation of mixtures by the method of thermodiffusion was developed. In 1939, O.I. Brodskyiwas elected academician of the Academy of Sciences of the USSR on the specialty “Physical Chemistry”. 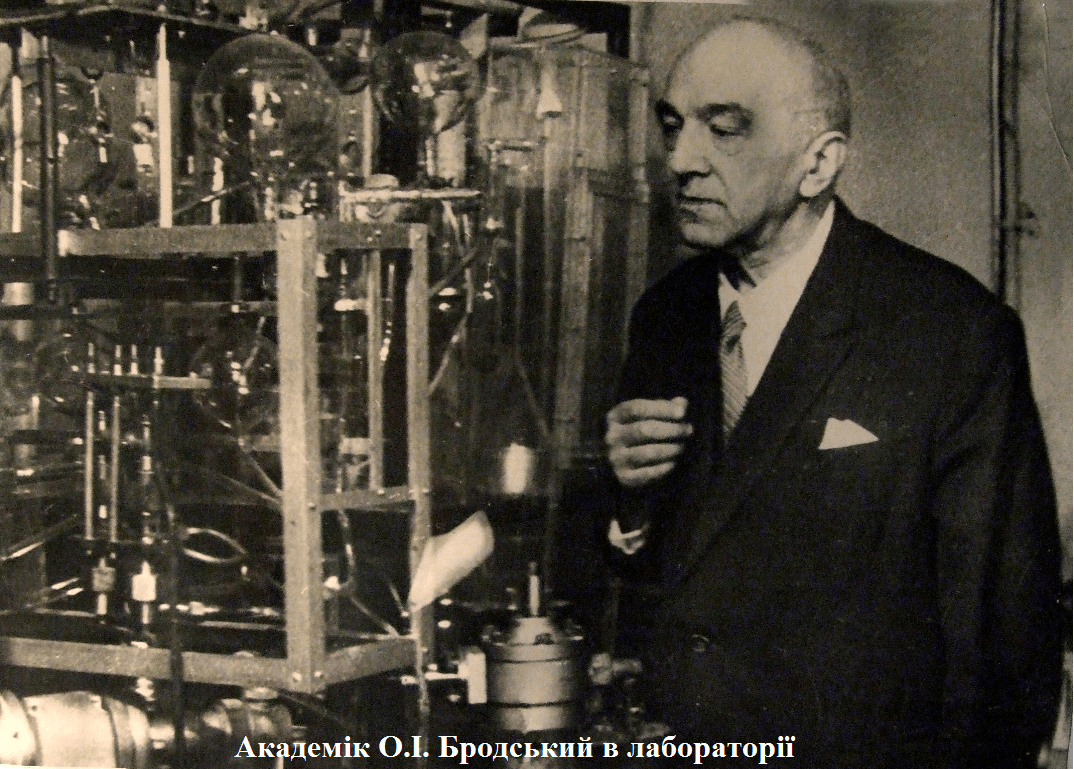 After the return of the Institute from evacuation in 1944, the Department of Physical Chemistry was led by Professor Volodymyr Roiter (1903-1973).

Under his direction, the Department conducted research in the field of kinetics and catalysis. V.A. Roiter generalizes work on the study of the mechanism of polarization on Fe, Ni, Zn, Cu-electrodes. A single theory of electrode processes was created. 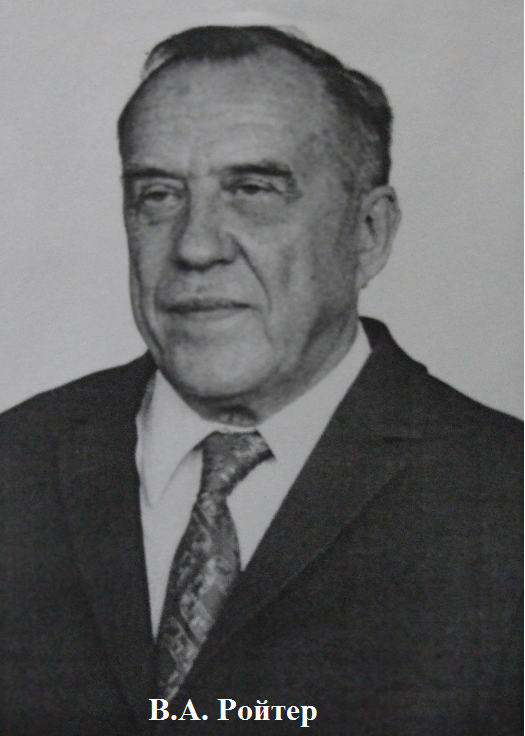 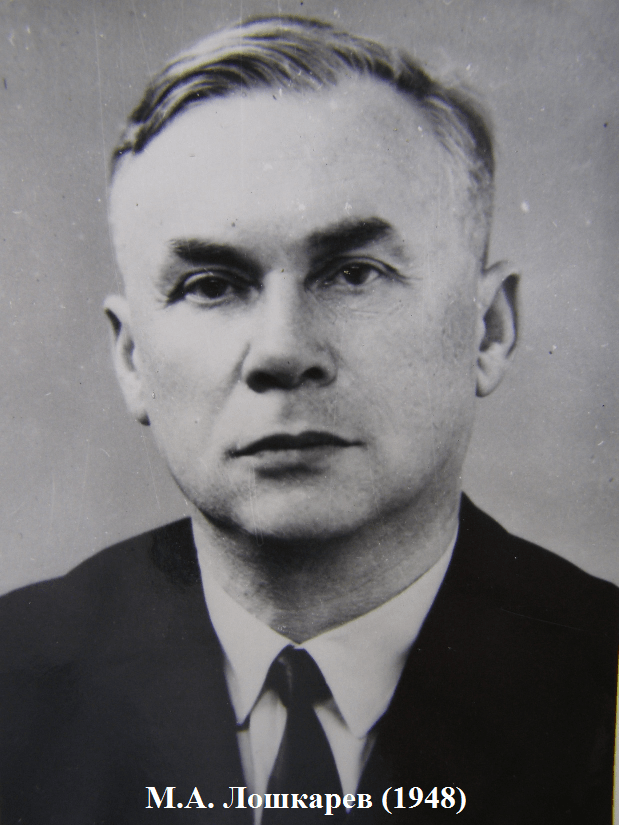 From 1948 to 1986, the Department of Physical Chemistry was headed by Doctor of Economics, Professor Mykhailo O.Loshkariov (1913-1986). The main direction of scientific research of the Department is the kinetics of electrode reactions in the presence of organic substances. Systematic studies of these issues have made it possible to substantiate the fact of the emergence of an additional energy barrier to the process of discharge-ionization. The study of this regularity has opened new ways of controlling the kinetics of electrochemical reactions, which made it possible to develop new progressive technological regimes of industrial electrocrystallization of metals. In 1967, M.O. Loshkariov was elected a corresponding member of the Academy of Sciences of the USSR, and in 1978 he was awarded the title “Honored Scientist of the Ukrainian SSR”.

Under the guidance of M.O. Loshkariov worked a large team of teachers and staff who made a significant contribution to the development of the theory of adsorption chemical polarization (O.M. Ozerov, O. Kryvtsov, V.I. Chernenko, Yu.M. Logkariov, F.Y. Danilov , O.O. Kryukova, M.P. Sevryugina, E.I. Dubiago, B.I. Tomilov, M.P. Yefremova, T.F. Diachenko, I.P. Kudina, A.A. Kazarov , G.E. Bol, A.F. Nesterenko, etc.). The teaching of physical and colloidal chemistry was continuously improved, the training laboratories were equipped with modern instruments, a wonderful pedagogical and scientific team was created. In 1975, on the basis of the laboratory of the Department of Physical Chemistry, a Problem Research Laboratory of Metals Electrodeposition and Preparation of the Surface before Coating was created, which was the main organization in Ukraine on the issue of “New technology of plating”, and in 1982 – Department of Electrical and plasma-chemical processes Institute of General and Inorganic Chemistry USSR. The number of employees of the Laboratory was 36 people. The results of the introduction of scientific developments each year gave an economic effect of about a million rubles. The Department has always had a creative atmosphere, even at breaks. 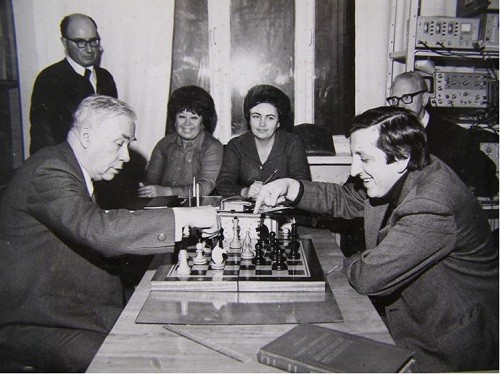 In 1986, the Head of the Department was Doctor of Chemistry, Professor Felix Yosypovych Danilov, one of the leading representatives of M.O. Loshkarev’s scientific school. Prof. F.Yo. Danilov and the staff received a new theoretical and experimental material that made it possible to substantially develop the theory of polarization. During these years, a team of scientists devotes a lot of attention to applied developments in the field of electroplating and their introduction into industry. 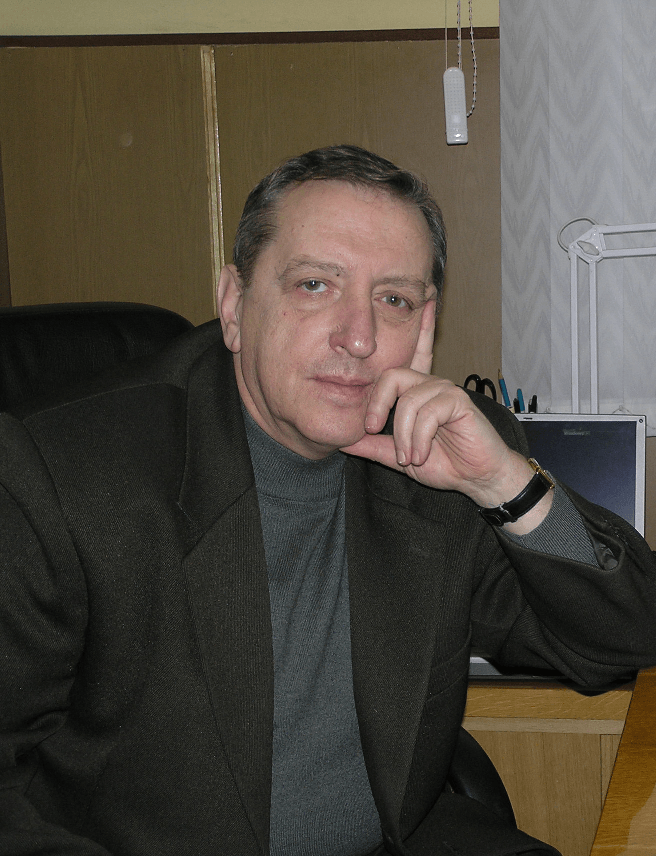 Scientific researches of the laboratory were carried out according to the targeted complex programs of the USSR SSR, USSR Academy of Sciences, Ukrainian SSR, Minhimprom, Ministry of Housing and Regional Programs. During the first 10 years of the existence of PSDL ME, 15 new technological processes were developed, which wererecommended for the wide application and inclusion of GOST and OST in a number of industries.

The economic effect of their implementation was more than 13 million rubles. Licenses were sold to Germany, Italy, and Japan. The process of chromium plating was implemented in Bulgaria, in conjunction with foreign partners; the launch of the technology of zinc plating of couplings at new enterprises was launched. The high level of development was marked by the resolutions of the USSR State Committee for Science and Technology and by the 14 medals of the USSR and USSR VDNH. The volume of works until 1991 reached almost 1.5 million rubles, and the number of employees – 90 people.

Thanks to the successes in solving fundamental and applied problems in 1994, the Research Institute of Galvanochemistry was created on the basis of the PSDL ME. The research institute of GC employed 60 scientists, including 3 doctors and 16 candidates of science under the direction of prof. F.Y. Danilov. 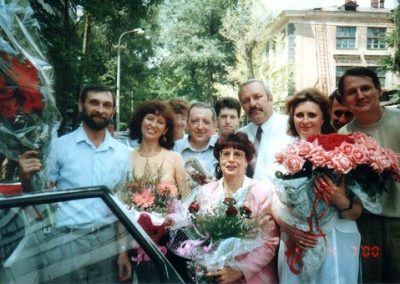 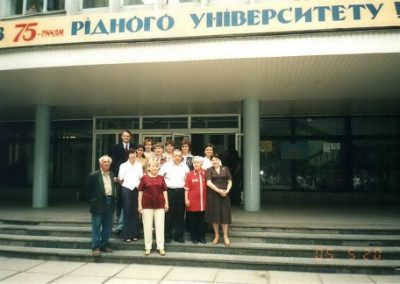 According to the results of work in 2007, the staff of the Department of Physical Chemistry and Research Institute of Galvanochemistry were awarded with the Diploma for the 1st place in the group “General Education Departments”. 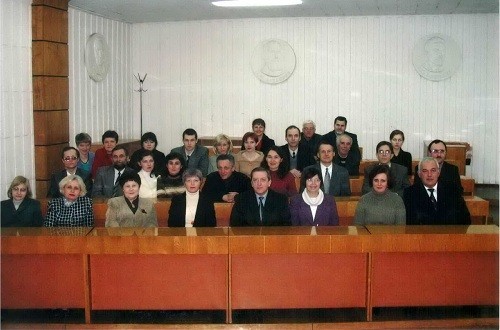 At the initiative of the Department, ten All-Union and Republican conferences on current issues of electrochemistry have been held. Published more than 1000 scientific works, several monographs, more than 120 certificates of authorship and patents for inventions were received. 100 candidate and doctoral dissertations have been defended.

In 2010 and 2011, the Department was recognized as the best in the competition “Rating of Departments and Faculties of the SHEI USUCT”.

Since February 2013, the Department was headed by Doctor of Chemistry, professor  Oleksandr Borysovych Velichenko. 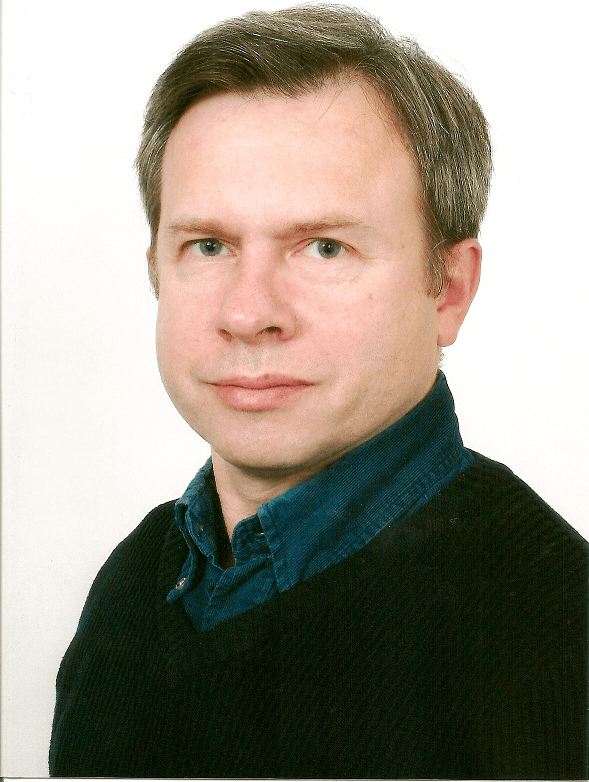 Continuing the tradition, the Department received a victory in the competition “Rating of Departments and Faculties of the SHEI USUCT” on the results of 2013-2014 and 2014-2015 academic years.

In 2013, the   Professor of the Department Vitalii Pavlovych Kuprin became the winner of the state prize of Ukraine in the field of science and technology.

From 1978 to May 2015, V.P. Kuprin worked at the Department of Physical Chemistry, in the problem research laboratory of electrodeposition of metals and preparation of the surface before applying the coatings. In 1993, he defended his doctoral dissertation, since 1994 – he was a professor of the Department of Physical Chemistry of the SHEI USUCT. The main scientific works are devoted to the study of the adsorption of organic compounds on solid electrodes, the development of technological processes of degreasing metal surfaces, and the creation of environmentally safe explosive materials. Developed under the direction of V.P. Kuprin’s technological processes of surface preparation before applying anti-corrosion coatings were introduced into production at dozens of enterprises in the CIS countries. Licenses for some of them were sold to firms in Germany, Japan and Italy.

Emulsion explosives produced by “Ukrait” are widely used in ore and granite quarries of Ukraine, which allowed to abandon environmentally hazardous TNT explosives. 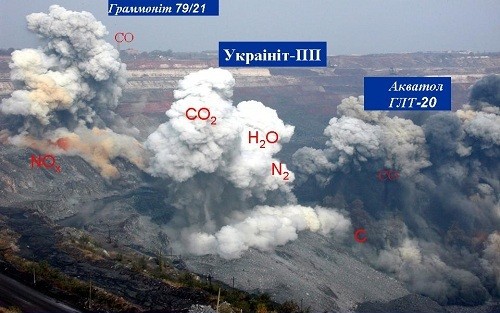 V.P. Kuprin is a member of the Union of Explosive Engineers of Ukraine. Has published more than 250 scientific works, more than 40 certificates of authorship and patents for inventions, 2 monographs.

In 2014, three teachers of the Department: candidates of chemical sciences Tetiana V. Lukianenko, Olga I. Kasian, Valentina O.  Knysh won the prize of the President of Ukraine for young scientists for the cycle of works “Nanocompositionelectrocatalysts for controlled synthesis”.

The Department has creative personalities. Assistant Olga I Kasyanbecame a scholarship holder of the Cabinet of Ministers of Ukraine in the field of science and technology (newspaper “Word Chemist”, p. 2). The associate professor of the Department, Bogdan V Murashevich, winner of the contest “Young Scientists – Dnipropetrovsk Region 2014” (newspaper “The Word Chemist”, page 3 ), presented the work “New dressing material for disinfection of open wounds and disinfection of water.” 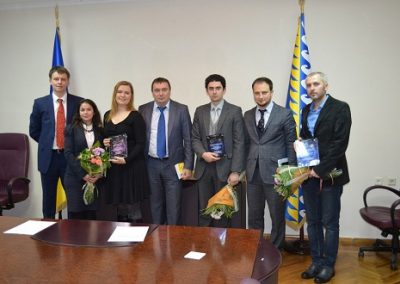 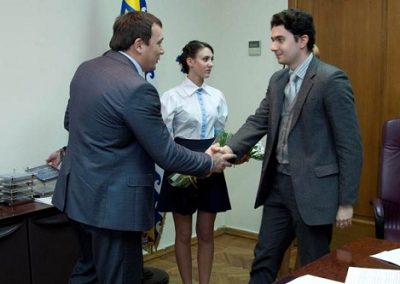 He is also a finalist of the Vernadsky Challenge 2015 engineering startup competition from Google Ukraine and Noosphere Ventures. 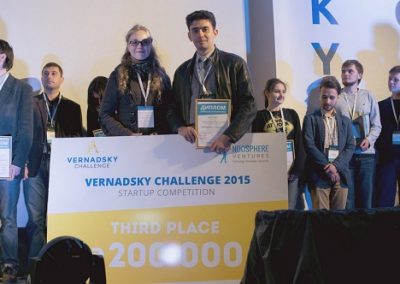 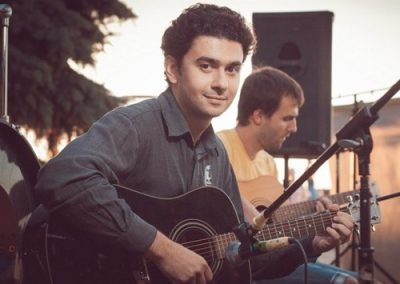 On the occasion of the 85th anniversary of the University, the Department of Physical Chemistry presented some of its scientific achievements at the University exhibition , where Professor Oleksandr B Velichenko, the Head of the Department, gave an interview to the local television channel.

The academic secretary of the Department is Tetiana V. Lukianenko, who, along with the educational work, leads a considerable amount of scientific work, received the thanks from the chairman of the Dnipropetrovsk City Council. 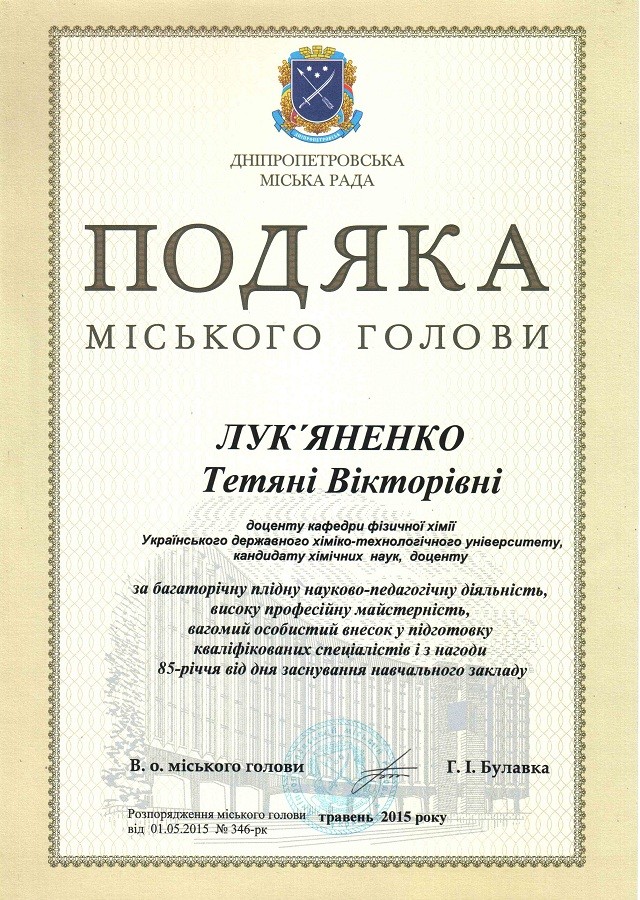 In September 2015, the 7th Ukrainian Electrochemical Convention “Modern Problems of Electrochemistry: Education, Science, Production” was held in the Kharkiv National Technical University “Kharkiv Polytechnic Institute” within the framework of the program “Science for Peace and Security.” Employees, doctoral students and postgraduate students of the Department actively participated in plenary sessions: presented 6 papers, as well as professors Velichenko OB, Danilov F.Y. participated in meetings. (link to the folder “VII photo collection”).