Scientific researches at the Department of Materials Science are carried out in the following areas, which are headed by the doctors of sciences, professors:

On the basis of the development of the main direction, the Department of Materials Science repeatedly won the competitions of the Ministry of Education and Science of Ukraine for the implementation of fundamental research work financed from the state budget (scientific supervisor of works – D.Sc., prof. O. B. Girin):

As a result of the performed work, an unknown previously known phenomenon of electrochemical phase formation of metals was discovered through the phase of a supercooled liquid state, which made fundamental changes to the existing ideas about phase formation of electrodeposited metals. On the basis of the data obtained, it is possible to purposefully create fundamentally new types of electrochemical coatings, in particular nanostructured-textured or amorphous-composite coatings that have unique properties. 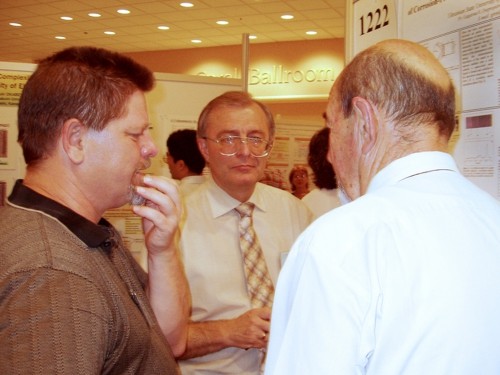 Discussion of Professor O. B. Girin with Dr. McQuin (USA) (left) at the 206th ECS Scientific Symposium in Honolulu (USA) 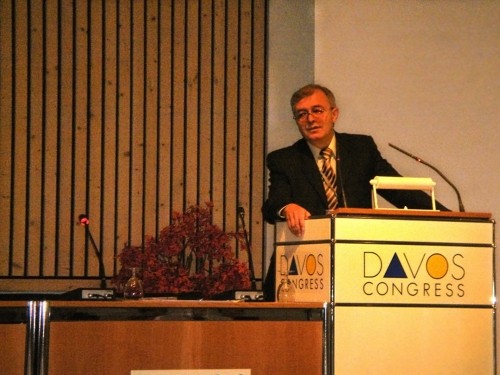 Speech by Prof. O. B. Girin at the Davos-Congress Center at the AFES International Scientific Forum in Davos (Switzerland)

The Department of Materials Science constantly pays considerable attention to the training of highly skilled personnel. At present, the Doctor of Science Doctor D.O. Fedin studies at the department, the theme of the dissertation: “Development of the theory and methods of calculation of open gear gears of drum mills” (scientific consultant – D.Sc., professor B.V. Vinogradov). Senior researcher V.V. Matveev completes his doctoral dissertation on “The theory of electrochemical recrystallization in porous electrodes: substantiation, verification, use”, and the assistant of the chair D.G. Korolyanchuk is preparing for the defense of the candidate’s thesis (theme of work: “Electrical conductivity thin layers of electrolyte on the border with air “).

The main direction of the international scientific and technical activity of the Department of Materials Science is the development of technologies for obtaining coatings with improved properties. Under the scientific guidance of Professor O. B. Girin and with his participation, a number of wins in international competitions of the Ukrainian Scientific and Technological Center (STCU) on scientific and technical projects that were performed on request of the governments of the USA, Canada and the European Union were received.

During 2003-2006, the Department of Materials Science of the Dvnz UDKhTU jointly with the Scientific and Technical Center “Polymet” completed the scientific and technical project of STCU No. 2520 “The complex of anti-corrosion protection technology of tin used in the food industry” (funded by the European Union and Canada governments). This project was designed to meet the needs of the general community. Thus, long-term preservation of food products without losing their quality is one of the main factors that significantly affects the health and life of a person. Protective coat is the most common material from which containers for preservation and long-term preservation of foodstuffs are made. If we take into account that more than 300 million cans are opened every day in the world, the problem of resource-saving canning tin production should be considered very relevant for any country in the world. In addition, this problem is of great strategic importance for our state because of the fact that the main stocks of foodstuffs are stored in the long-term by the State Reserve of Ukraine not in glass, plastic or cardboard packaging, namely in tin cans made of tinned tin. 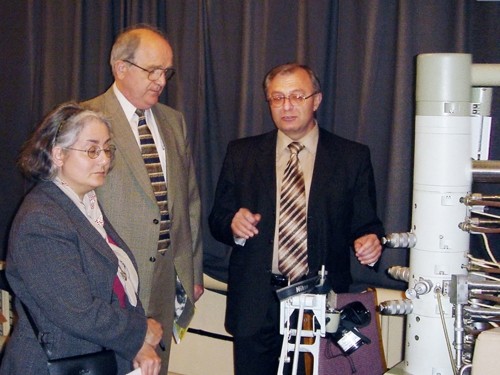 Monitoring of the implementation of the STCU Project No. 2520 by the United States Department of State, Ms. J. Tennenbaum, and US Deputy Chief Executive Officer of the STCU, Mr. V. Korsun

Within the framework of the project of STCU No. 2520, the complex of technologies of corrosion protection of tin is developed on the basis of the use of open phenomenon of electrochemical phase formation of metals through the stage of supercooled liquid state:

The developed technologies compared with the known ones are more resource-intensive and energy-saving (due to the reduction in the thickness of the protective coatings without losing their quality) and more environmentally friendly (due to the use of less toxic electrolytes). These technologies have high potential for commercialization on the world market.

The staff of the Department of Materials Science solves scientific and technical problems in conjunction with scientists from foreign educational and scientific institutions, which promotes the integration of the State University of Agriculture and Technology with the world scientific community. So, the specialists of the department cooperate with scientists from such universities and institutes as the National Institute of Standards and Technologies (Geysersburg, USA), the National Technical University of Athens (Greece), the University of McGill (Montreal, Canada) and others. 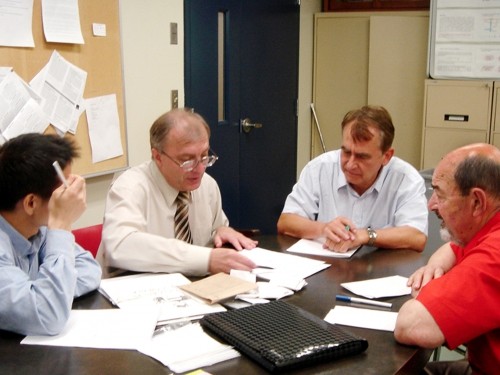 Discussion of the results of collaborative research at the Department of Materials Science and Materials Processing at McGill University (Montreal, Canada) with the head of the department, Professor E. Shpunar (second to the right)

In 2005-2007, the specialists of the department performed two STCU scientific and technical projects jointly with the State Bank “Yuzhnoye”, namely: “Development of an effective technology for the extraction of precious metals from recycled raw materials” (project No. 3069, together with the Department of Inorganic Chemistry, DINN UDKhTU) and “Development and research of high-performance alloys of the Si-Ge system” (project No. Gr-87j, together with the NMetAU Department of Materials Science). These projects were funded by the US government.

At present, the issue of concluding agreements for the implementation of partner scientific and technical projects with the industrial companies of Brazil (Companhia Siderurgica Nacional) and Germany (Rasselstein GmbH) are being solved. 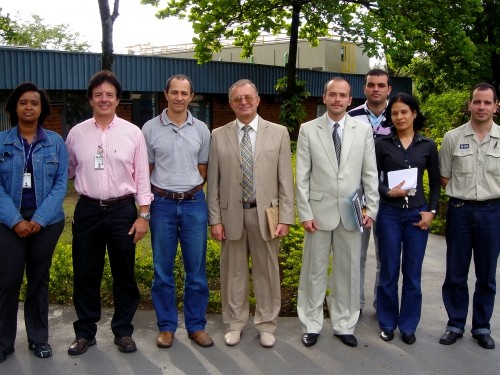 Finding ways to commercialize the technology developed at Siderurgica National (Volta Redonda, Brazil), with the head of the central laboratory Dr. H. Mello (second from the left).

The staff of the Department of Materials Science is constantly in the scientific research, activates the teaching of students through the implementation of the results of their development in the educational process, develops new areas of cooperation with leading institutions and industrial companies.

Since 1978 till now, the staff of the Department of Applied Mechanics carries out research and development of machines for fine grinding of polymeric, fibrous and moist materials for their utilization and use as raw materials for obtaining new products (VI Kravets, VF Antonenko, MI Ogurtsov). In the process of research, several designs of mills have been developed. One of the latest developments of associate professors V.I. Kravets and VF Antonenko – a versatile three-stage mill with an adjustable degree of crushing opens up wide opportunities for its use in various industries and agriculture. Studies on improving the design of mills and the search for new applications in the industry continue.

Employees of the Department Ass. Glychikov VV and Shishko SV together with an employee of the department of TM and SM as. Trubitsin MN were engaged in theoretical questions of the internal mechanics of the drum mill. Participated in the 3rd international conferences “Theory and practice of the processes of crushing, separating, mixing and sealing materials” (2009-2011), Odessa, where they delivered reports on the development topics. In the process of solving the tasks, scientific contacts are maintained with: prof.Semchenko G.D. (KHPI); prof. Sokur N.I. (Kremenchuk Technical University); prof. Naumenko Yu.V. (Rivne Unitary Enterprise of Water Management); prof. Bilenko LF (St. Petersburg Institute of Mechanobras, Russia).

The new material – fine sand, which is glass microspheres with a diameter of less than 200 microns, having a thickness of a sphere of the order of several microns, is received. Since in the middle of the microsphere is a vacuum, the sand is a good thermal insulating material for mastics, putty, paint and so on. Sandpaper is tested on a paper mill in Dnipropetrovsk, as a heat-insulating material for boiler equipment.

The facility for conducting research on the cavitation process is being developed to optimize energy consumption. With the help of hydrodynamic devices, cavitation enters the liquid flow and is used to intensify physical, chemical and reactive processes.

Head Kravets V.I. and the assistant of the Department Hnatko O.M. Participated in the NATO Environment Conference under the auspices of the Academy of Geopolitical Problems (May 2011, Dnipropetrovsk) with the reports: “Solid waste processing of industrial production by fine milling in a centrifugal mill” and “Electrolyzer for the production of environmentally safe functional water solutions: Study of mass transfer in the ring”. Scientific work was conducted jointly with the University of Manitoba, (Winnipeg, Manitoba, Canada). 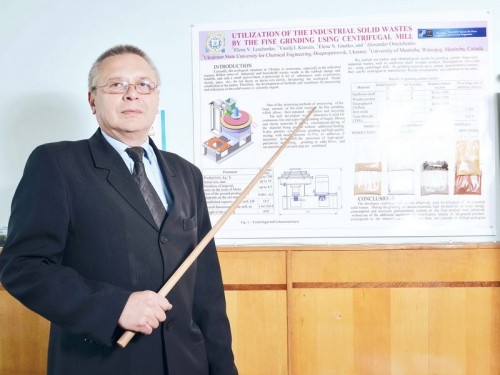 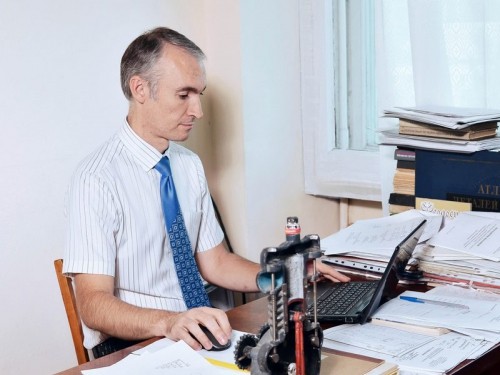