DEPARTMENT OF ENTREPRENEURSHIP, ORGANIZATION OF PRODUCTION AND THEORETICAL AND APPLIED ECONOMICS

In 1930, with the creation of a Chemical-Technological Institute, the training of engineer-economists for the chemical industry began, in addition to the training of mechanics and technologists.

In connection with the rapid growth of students number, and in order to improve the training of specialists, a general education department of Industrial Economics and Organization of Production was established in 1963. The first head of the Department was Associate Professor I.T. Diatlov, who headed the Department until 1967. Together with him at the Department worked: Ph.D. assistant professor M.S. Vitukhnovska, senior teachers N.I. Horodetskyi and S.V. Hryhoriev, acting assistant professor M.D. Horiachkin, who was invited from the position of head of labor department and salary of Dnipropetrovsk tire plant. In 1967, associate professor M.D. Horiachkin defended his Ph.D. thesis. In 1964, the composition of the Department was supplemented by the teacher S.A. Voievodin, who defended his Ph.D. thesis in 1968.

In 1967, the department created a classroom of economy of industry and organization of production, in which, besides the educational literature, 28 computer and computer machines were installed, 6 of them electronic.

At the same time, the scientific direction of the Department was formed on problems of increasing the efficiency of chemical and coke production and its separate aspects: increasing productivity, improving the organization of production and labor, etc.

Since 1986, the Department was headed by a candidate of technical sciences, associate professor B.А. Kior. it was replenished with: N.S. Makarova, VP Kolesnikov, V.E. Zaitsev, O.I. Guba, V.M. Radin, D.M. Potemkin and other leading experts.

From September 2010 till May 2011, the duties of the head of the Department were held by the candidate of economic sciences, associate professor N.S.Horbach

From June 2011 to August 2016, the Department was headed by Doctor of Economics, Professor O.Sh. Parshina.

During its existence, the Department of Industrial Economics and Organization of Production has trained more than 1500 specialists.

Since September 2016, the Department of Industrial Economics and Organization of Production is headed by Doctor of Economics, Corresponding Member of the Academy of Economic Sciences L.D.Harmider.

The heads of the department 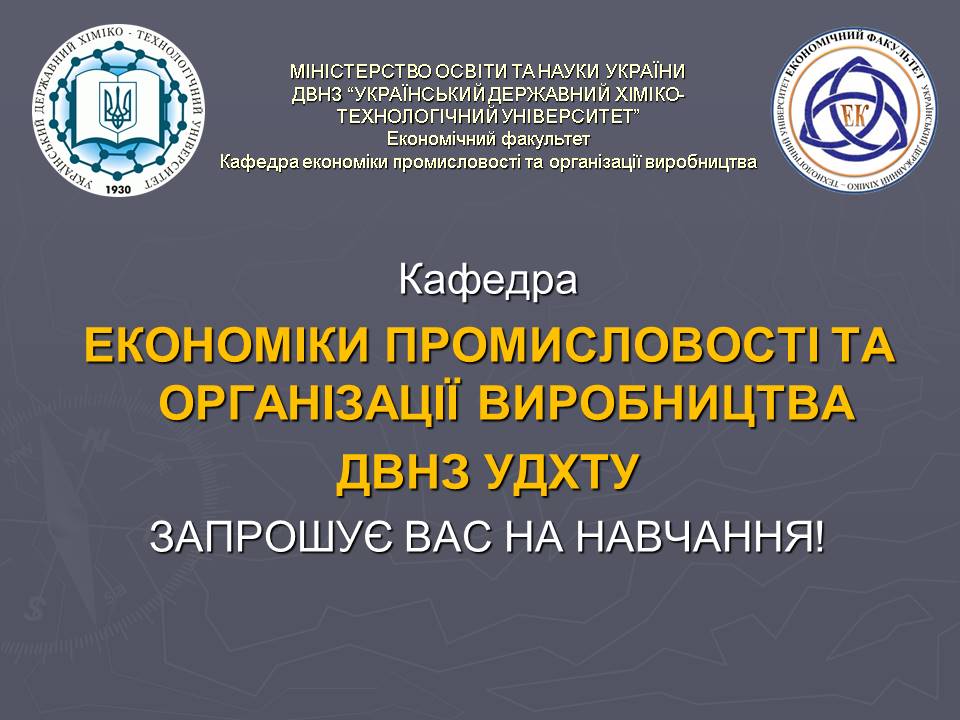 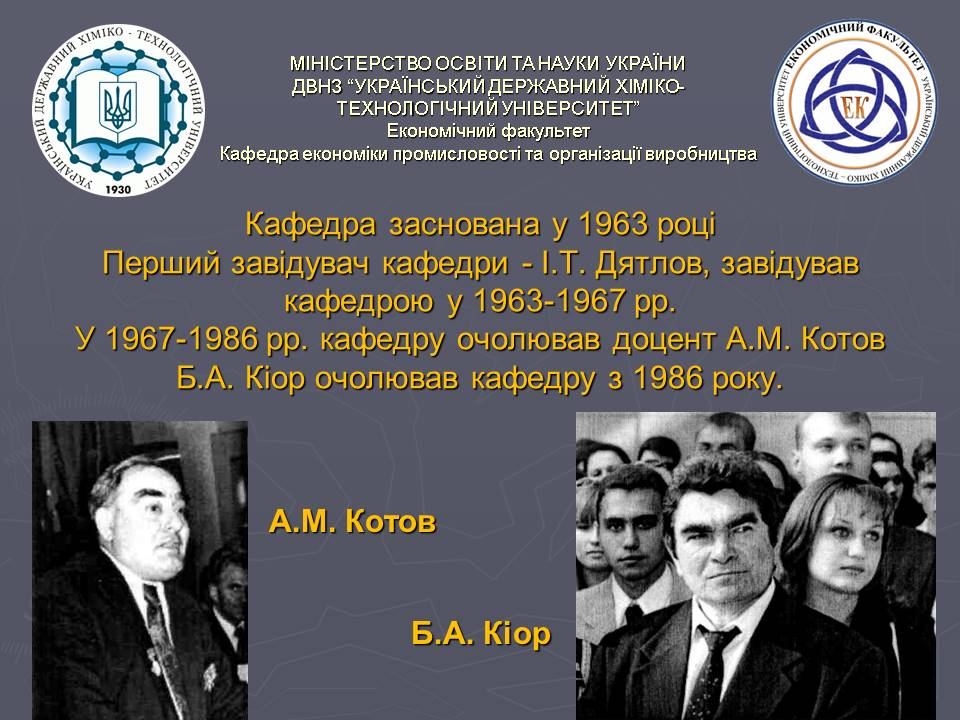 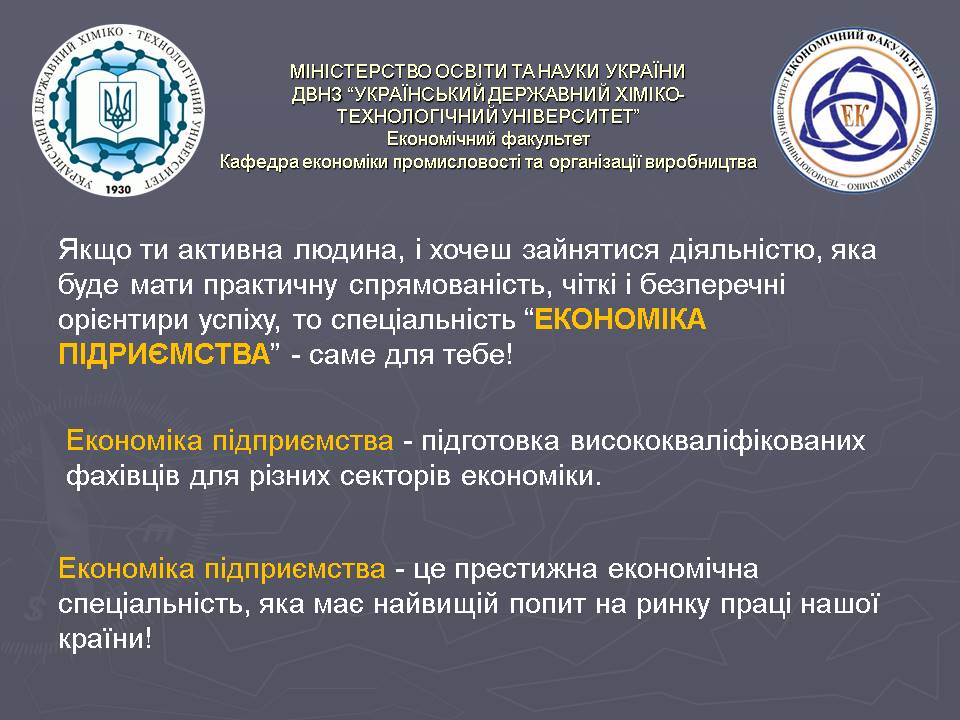 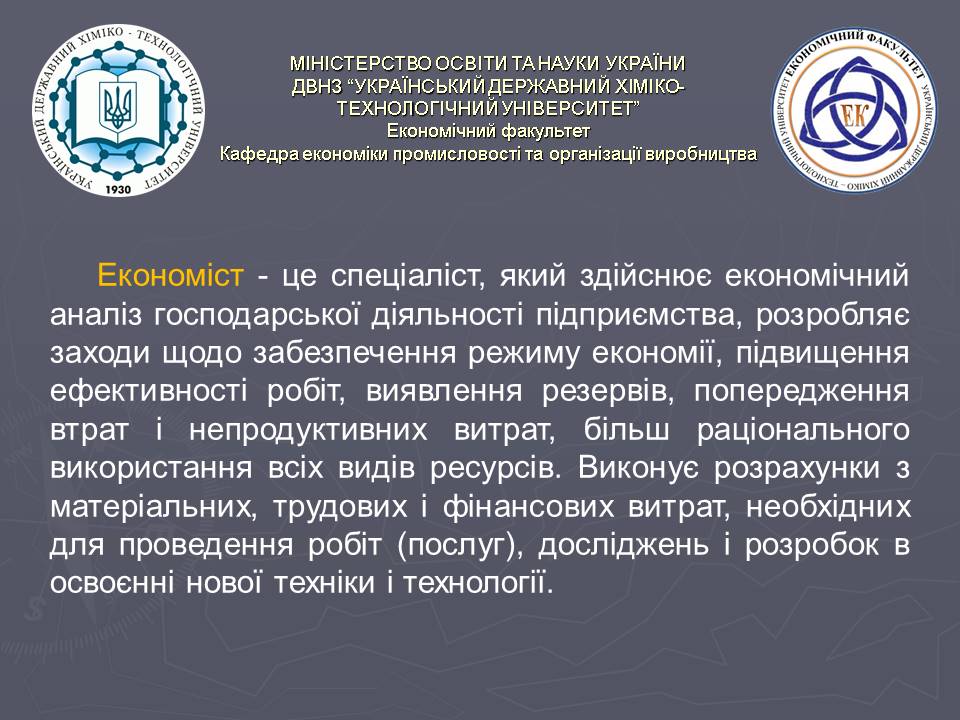 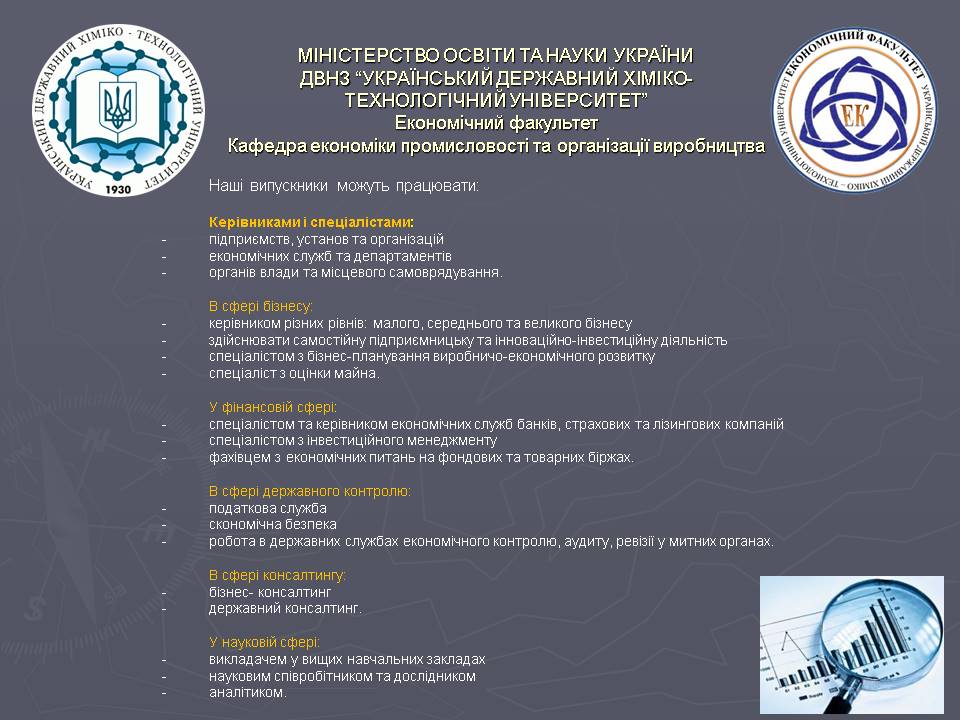 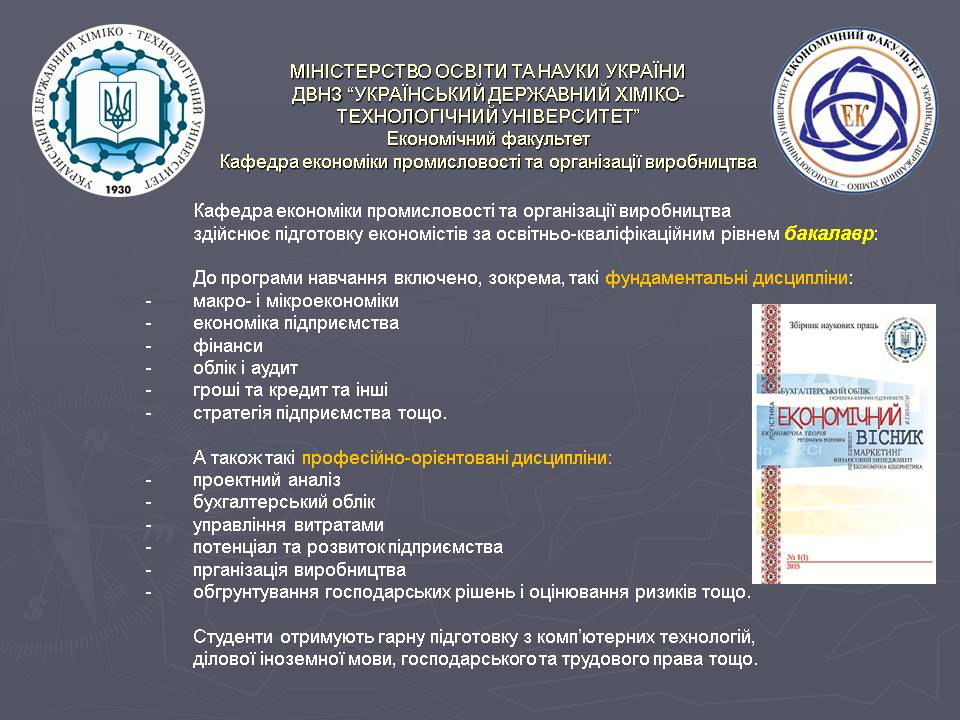 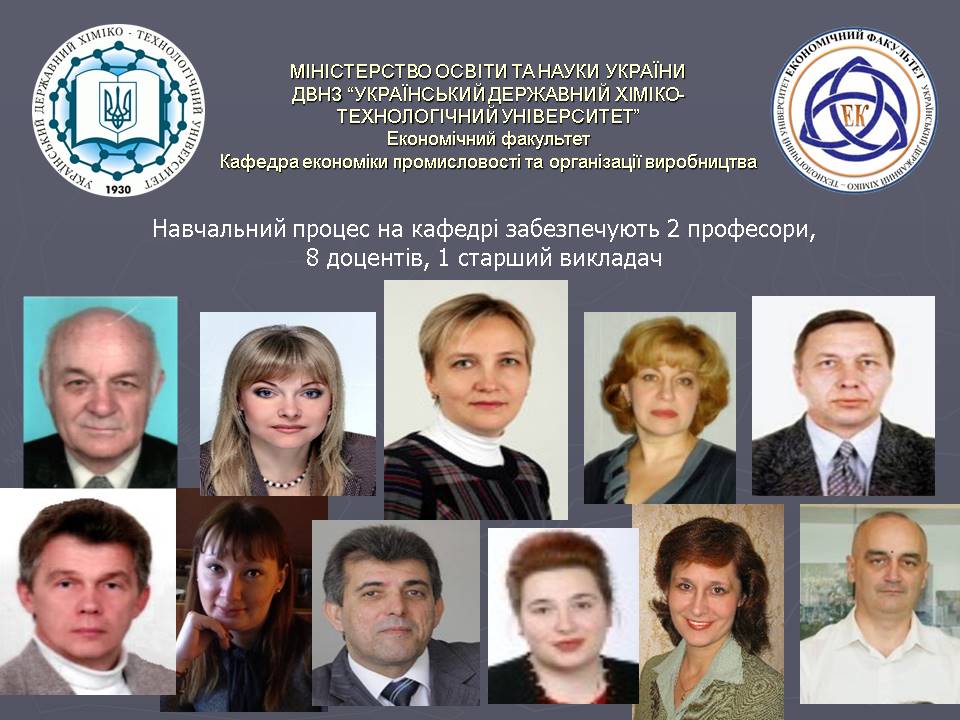 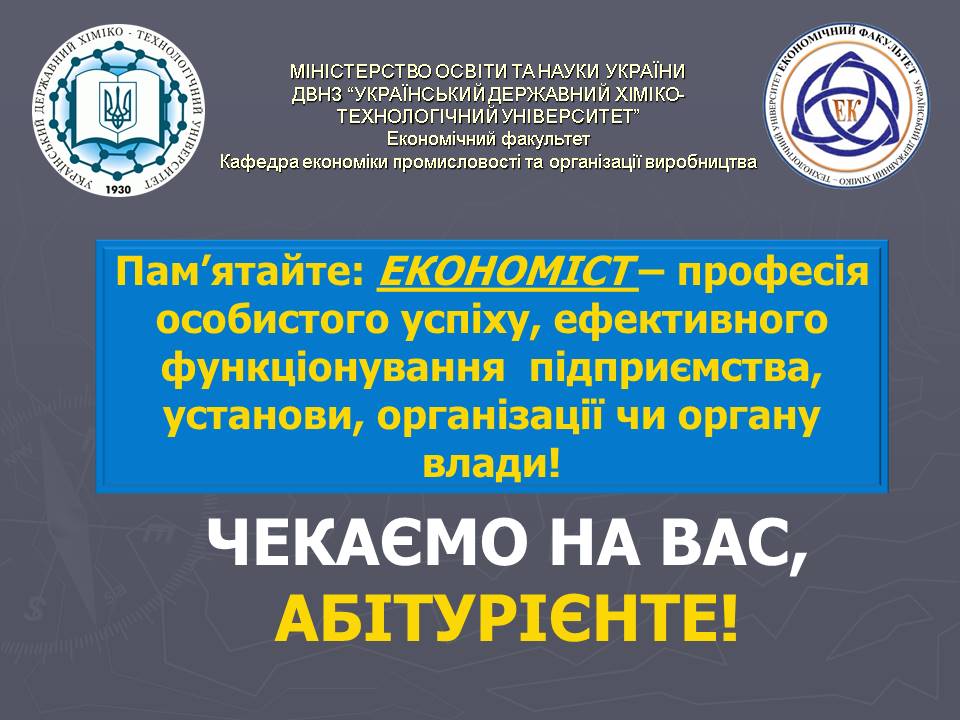 The Department of Theoretical and Applied Economics as a separate component of the University was established on August 31, 2015, in accordance with the rector’s order number 215, according to which the departments of economic theory and jurisprudence and economic cybernetics were united.

The Department of Economic Theory and Law, until 1994 – political economy, has the same long history as the University. Among its first teachers were Ya.A. Kamenev, T.D. Taran, MA Nesterovsky.

The teaching of political economy was restored upon the return of the University to the evacuation in December 1943. In the first postwar years, the Department was replenished by the professors G.I. Shahnovym (1949) and Ya.E. Ereomov (1950), who taught political economy for a long period – G.I. Shahanov is about 30 years old, and Ya.E. Yeremov is more than 50 years old.

Since September 1953, the Department has become an independent unit and the formation of its scientific and pedagogical staff begins. Its first head was G.I. Shakhanov, in 1959 the head of the candidate was V. Ya. Bobrov, who in 1960 was changed by the associate professor G.M. Bykov. During this period, the following teachers worked at the Department: B.M. Glushchak, .M. Leontiev, M.I. Makashova, L.M. Kotov, Fr. Volchenko

In 1956, the Department of political economy was created at the department, which was headed up to 80 years of M.D. Teslia, and the permanent senior laboratory was O.Y. Stogniy.

Since the beginning of the 60s the scientific direction of the Department was formed. Her staff examined issues such as pricing in agriculture; productivity of social work; improvement of working conditions, etc. The teachers of the department took an active part in the research of scientific and practical problems on the basis of self-financing agreements with Dnipropetrovsk tire and paint and varnish plants and other enterprises of Ukraine. The results of research have been reflected in scientific publications. Since the beginning of the department’s functioning and by 1970 more than 150 works were published, in particular 2 monographs, 116 articles, 15 brochures, 19 abstracts at scientific conferences of different levels.

From the end of the 60’s to the beginning of the 80’s the Department was replenished with new employees: candidates of economic sciences V.N. Peremitina, O.S. Parshin, O.M. Zhumur, as well as graduates of Kiev State University named after. T.G. Shevchenko: SI Marchenko, N.S. Gorbach, N.O. Guseva. For 7 years, since 1975, V.М. Dorofeev headed the Department, who was changed by G.M. Bykov after his protecting of the doctoral dissertation. Subsequently, in 1993-1997 the Department was headed by O.S. Parshin, in 1997-2015, it was headed by associate professor. N.S. Gorbachev, from May, 2015 till August 31, 2015 the duties of the head of the Department were performed by the assistant professor N.O.Nikileva.

During this period, the staff of the Department investigated a number of self-supporting topics: “Socio-economic development of the Pokrovsky district of the Dnipropetrovsk region” (supervisor – assistant professor V.M. Dorofieev) and “Improvement of the economic mechanism of accelerating the NTP in the repair and basic production of the Azov Azov” (head of the professor G. M. Bykov). According to the results of the study, a collective monograph “Socio-economic development of the region was published. Comprehensive Plan “(K.: Harvest, 1985). Senior Lecturer Ya.E. Mr. Yeremov participated in the research group on research and appropriate registration of the history of the Dnipropetrovsk paint and varnish plant, the creation of a plan for social development of the Zaporozhye and Zhdanivsky (now Mariupol) coke plants, the production association Svma, the Zaporozhye association “Silicon-Polymer”, etc. .

From 1984 to 2008, there was postgraduate study at the Department. Scientific guidance was carried out by prof. AHEM. Bykov and Assoc. N.S. Humpback.

Since 2004/2005, the courses are taught at the Department related to the jurisprudence cycle.

The Department of Economic Cybernetics was established on July 1, 2002 in accordance with the Law of Ukraine “On Higher Education” (Article 30, paragraph 2), the Order of the Minister of Education and Science of Ukraine of 10.05.2002, the Statute of the UDCTU (Article 12), the Decision of the Academic Council of the University April 19, 2002 (protocol # 5) and the order of the rector of the university from June 21, 2002, No. 226.

For all its existence, the Department has carried out 16 issues and has prepared: bachelors – 410 specialists, specialists – 370 specialists in the specialty 7.03050201 “Economic Cybernetics”. The vast majority of graduates work on a specialty in the chemical and petrochemical industries. Among graduates are heads of divisions of industrial enterprises, commercial and banking structures.

The Department teaches 39 disciplines to students of noneconomic and economic specialties.

Heads of the Department: