From 1940 to 1960, Associate Professors of the Department German M.Ya. and Karasik O.Y. have done a great deal on energy use (combustion and gasification) of polygonal wastes of wet coal enrichment. Significant contribution to the theory and practice of the development of jet and flare processes in the combustion of gaseous, liquid and pulverized fuel in thermal units performed by the staff of the department under the direction of prof. Tsigankov G.T. Significant work was carried out to increase the efficiency of the use of fuel and energy resources by controlling the combustion process in thermal units of metallurgical and chemical industries. Significant economic effect was obtained.

The Department of Physics was founded at SHEI USUCT in 1930. The first head of the Department of Physics from 1930 to 1932 was Professor Malinovsky K. E. From 1930 to 1937, the Department was headed by associate professor Danilov V.I., later a member of the correspondent of the AS USSR. Thanks to its vigorous activity, a fund of demonstration equipment is created. In 1933, an X-ray laboratory for research work on X-ray diffraction analysis was organized and equipped at the department. In the pre-war period at the department four dissertations were defended by the candidate’s theses. 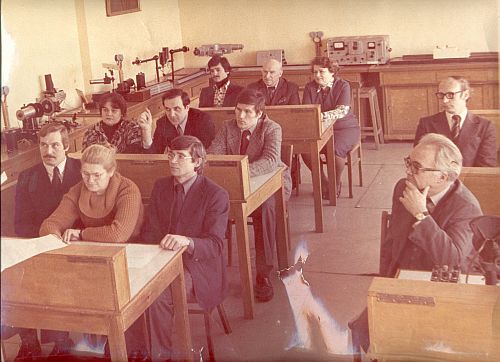 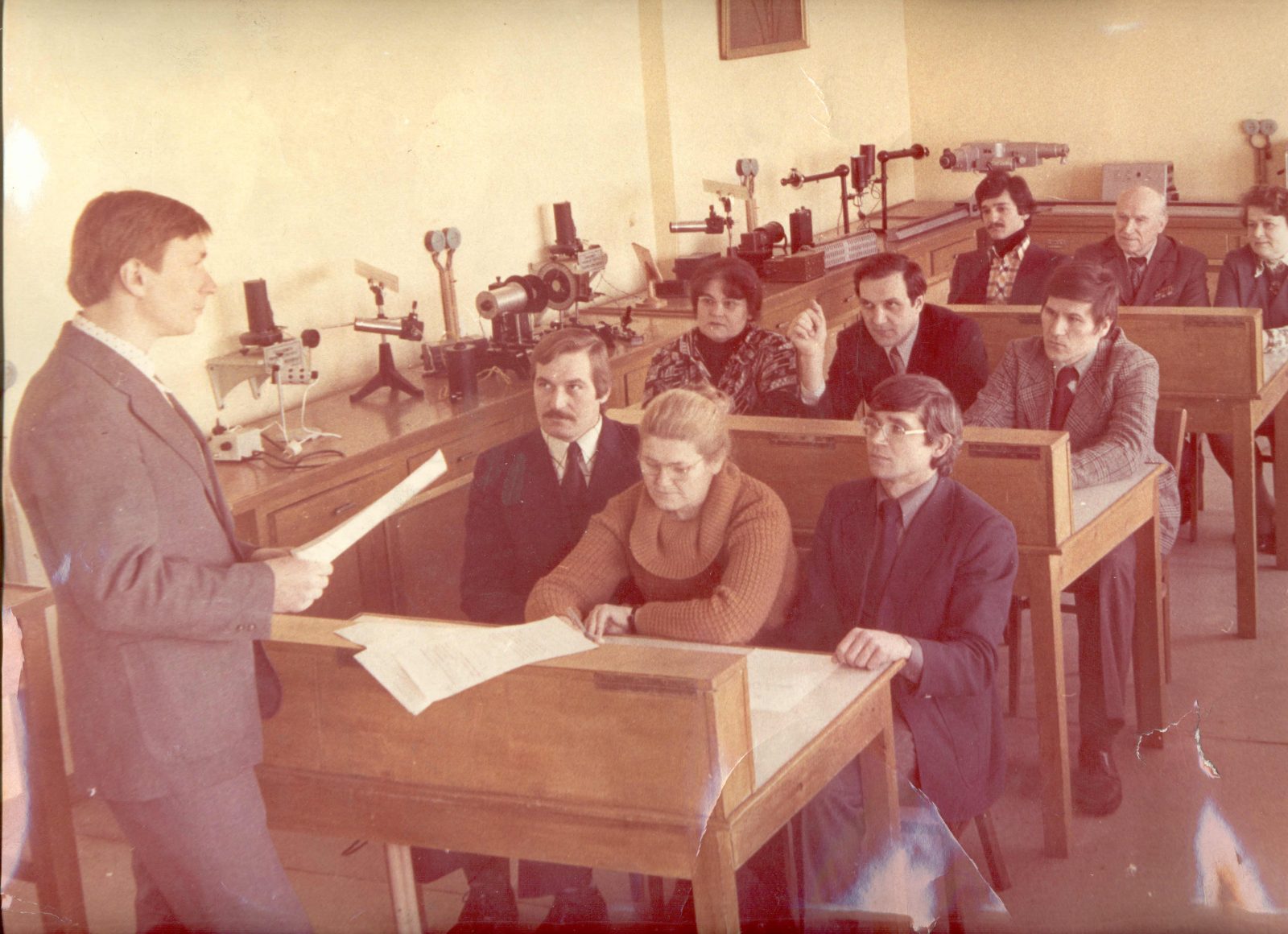 In 1961-1977, it was headed by professor Morozov V.P. Under his leadership, scientific studies were devoted to the problems of studying the properties of the structure of molecules and crystals.

In 1977-1987, the Department was headed by Professor Tsaune A. Ya., who developed the theory of spectra of molecules, molecular spectroscopy. 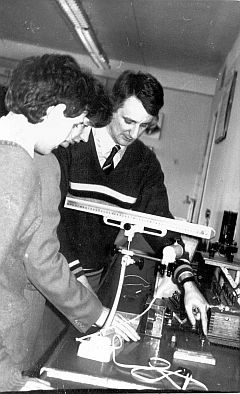 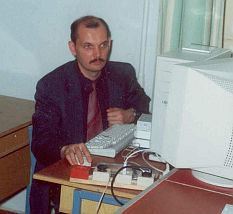 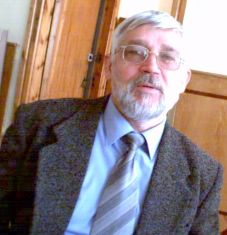 Since 1988, the head of the Department of Physics was Professor Nesterenko O.I.

Professor Nesterenko O.I. heads the scientific direction in studying the kinetics of reaction diffusion in multiphase systems of solids. The Department maintains scientific contacts with the Institute of Physics and Mathematics of the National Academy of Sciences of Ukraine, IFH of Russian Academy of Sciences, Dresden Technical University (Germany) A. Mickiewicz (Poland), Paris University named after. Pierre and Maria Curie (France) and others.

Also, manuals with a stamp of the Ministry of Education and Science of Ukraine: 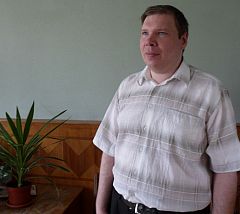 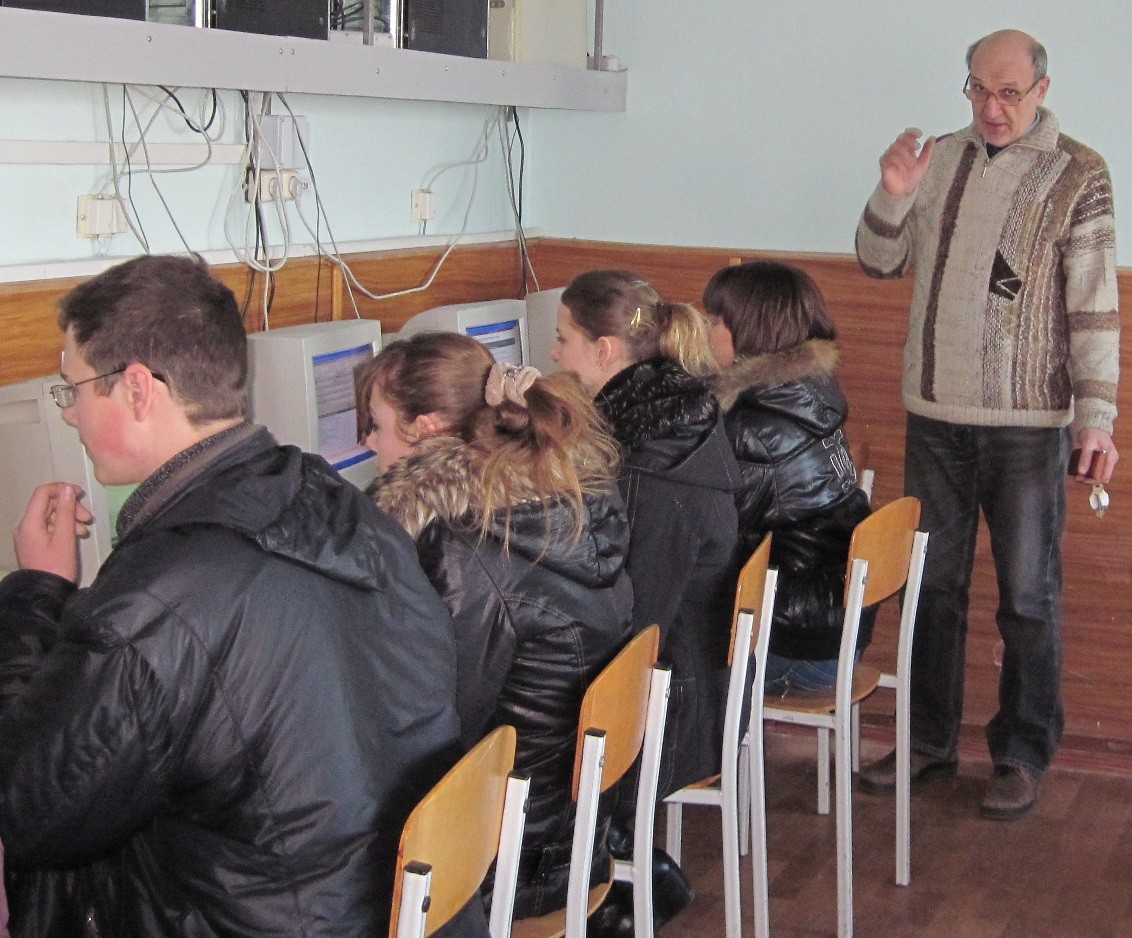 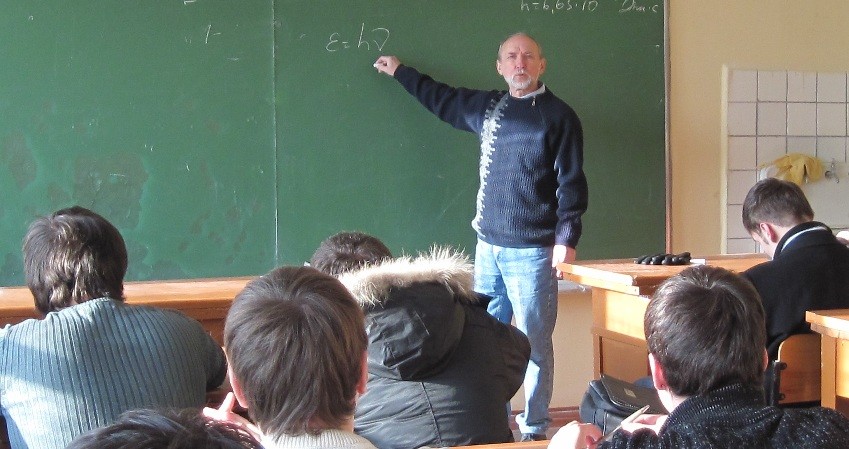 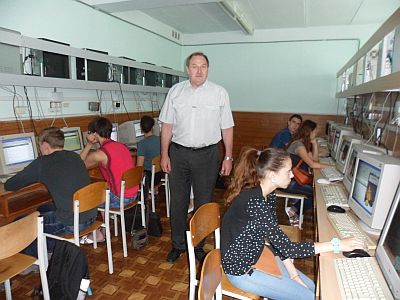 The history of the Department continues.

The Department was founded in 1953 by the member of the Academy of Sciences of the Kazakh Republic, Professor Volodymyr W Stender (1897-1969).

Later, the Department was led by Stender’s student, professor O.S.Ksenzhek, then by a well-known scientist-metallurgist professor Yu.G.Olesov. 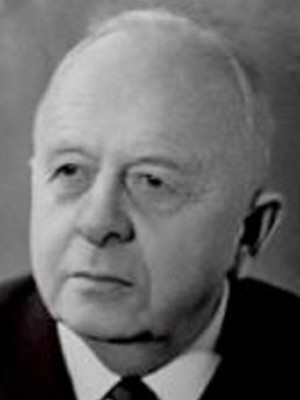 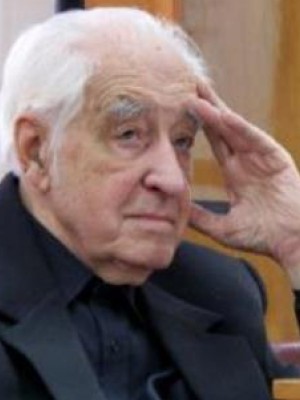 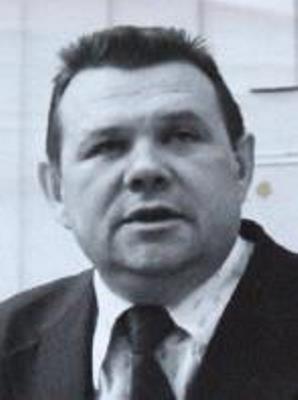 The next Head was a student of O. S. Ksenzek, Professor M. D. Koshel. Currently, the department is headed by prof. V.G. Nefedov. 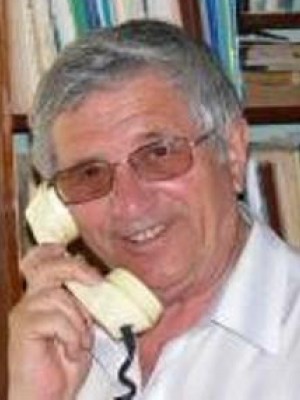 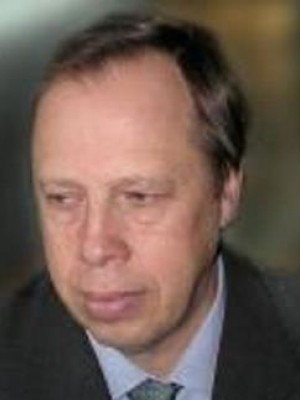 Over the period of the existence of the Department, more than 3000 specialists working in chemical machine-building and metallurgical enterprises, practically throughout the CIS countries, have been trained. About 50 graduates became directors or key specialists of enterprises, 38 defended candidate and 19 doctoral dissertations.

The technologies of continuous obtaining of zinc and copper foil, manganese, pure aluminum powder, refining of alloys, non-destructive metal-oxide anodes, and new technologies of synthesis for chemical current sources were developed at the Department. In 1973, a research laboratory for chemical current sources was created, which has been developing new energy-intensive lithium power sources. There were developed powerful fuel cells and water-lithium sources of current for marine use, were designed plants that accumulate energy solar and wind power plants. A fundamentally new equipment for film-bubble water purification from organic impurities and heavy metal ions, technology for cleaning industrial wastewater and the removal of non-ferrous metals from them was created.

The main direction of the scientific work of the Department is the study of the macro-kinetics of processes in the systems of electrolysis and chemical current sources:

During the last 10 years, eight candidate’s theses have been defended at the Department.

The first three years of the Department was headed by associate professor M.Ya. Herman. The staff of the Department consisted of experienced assistants N.N. Shvetsov and LG Ishchenko.  In 1956, the Head of the Department became an associate professor M.G. Lyre. In 1958, the Department was headed by professor P.P. Pyrotsky, and the teachers were N.N. Shvetsov, Zh.N. Levitin, P.O. Karnushenko. Professor P.P. Pyrocky was an outstanding scientist of the old school, who had encyclopedic knowledge in many fields of science. The Department trained students of the third, fourth and fifth years of study in all specialties on disciplines: “General electrical engineering”, “Electrical equipment of chemical plants”, “Electrical equipment of electrochemical manufactures”. 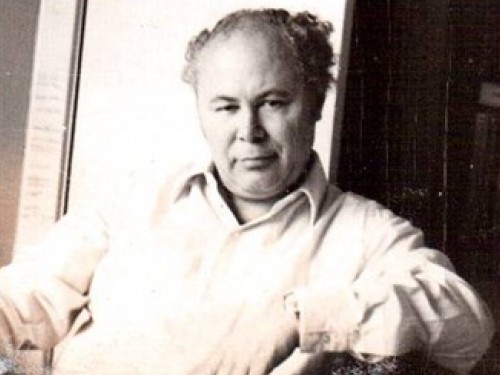 From 1965 to 1975, the post of the Head of the Department was assumed by associate professor N.N. Shvets. The scientific direction of the Department at that time was the study of leakage currents in the electrolysis workshops of chemical enterprises. Under the guidance of N.N. Shvetsov the staff of the Department: A.I. Sibileva, V.A. Potapov, O.N. Komlichenko, P.A. Karnushenko, V.A. Tkachenko, M.H. Kulinichenko, I.I. Papanova carried out research works that were of great importance for the development of applied electrochemistry. The Department cooperated with industrial enterprises and research institutes throughout the country. According to the orders of various enterprises (such as Ukrcinq, Berezinkivsky Soda Plant, Kirovo-Chepetsky and Volgograd Chemical Combines, Sumgayit Chemical Plant) more than 20 economic contractual works were completed, as a result of which a theory of leakage currents, methods for calculating leakage currents and a new way of measuring them in pipelines of electrolysis plants, new means for measuring and reducing leakage currents have been developed. The device “RA” was designed, which allowed to regulate the anodes currents in mercury electrolyzers for the synthesis of chlorine. 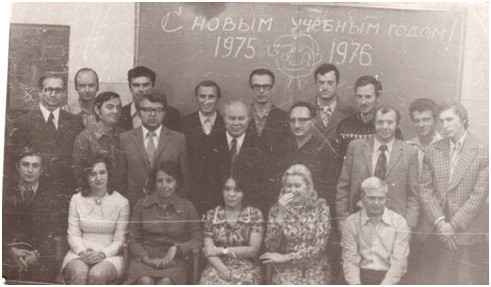 The educational equipment of the laboratories of electrical engineering was updated annually and replenished. In the 60s, promising mercury rectifiers for the time being, modern electric meters were purchased. The staff of the Department made electrical equipment to support the educational process (training three-phase transformers, inductive coils, water rheostats, capacitors, etc.). This made it possible to conduct laboratory studies by the frontal method in two training laboratories. 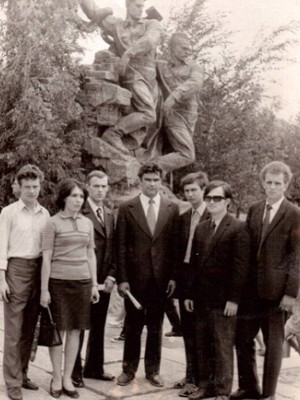 In 1975, Professor V.I. Chernenko was elected to the post of the Head of the Department, which he headed until 1991. V.I. Chernenko defended his candidate’s degree in 1960, and in 1972 – a doctoral dissertation. Being an outstanding scientist with a world renown, V.I. Chernenko made a great contribution to the development of science and its connection with production. Chernenko’s students came to the Department: candidate of chemical sciences M.G. Kropyvnyy, candidate of chemical sciences Yu.E. Udovenko, as well as young researchers – T.G. Yakunina, L.O. Snizhko, later – V.I. Sobornitsky, S.G. Pavlyus. 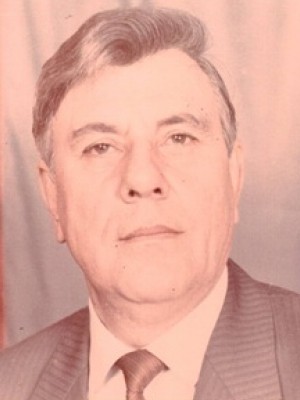 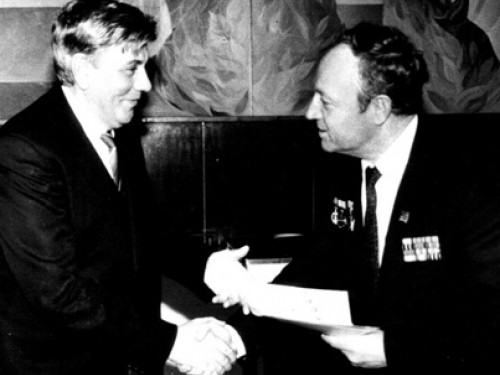 Most scientific research at this time was associated with the development of the theory of non-stationary electrochemical methods for analyzing the kinetics of electrode processes. The world scientific significance was the work of Professor V.I. Chernenko and his students in the development of the theory of coulometric method for small and large amplitudes of a polarizing signal, the Faraday rectification at controlled current and potential, chronopotentiation and chronoamperometry. They formulated the basic principles of choosing one or another method of studying the kinetics of various electrode processes. Later V.I. Chernenko with his students was one of the first in the Soviet Union to develop a new scientific direction – the study of the mechanism of the flow of anode processes at high voltages. Thanks to his work, a new process of anode-spark oxidation was studied and practically implemented, which made it possible to obtain new types of corrosion-resistant coatings. Postgraduate student of the Department S.G. Pavlyus for the development of the technology of oxidation of valve metals for aviation industry in the USSR received a silver medal of the USSR Airborne Defense and the two authors’ certificates on the technology of anode-spark electrolysis. Simultaneously, the staff of the department carried out work on the formation of cathode corrosion-resistant galvanic films. 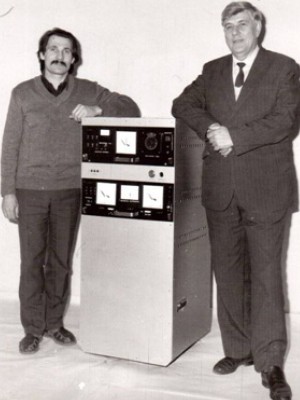 The Department used to work closely with leading enterprises and research institutes of the Soviet Union, such as BIAM, IELAN, Autoprom (Moscow); Institute of Materials (Lviv); shipbuilding organizations (Mykolaiv) and many others. Research works of V.I. Chernenko and his students received widespread recognition of domestic and foreign electrochemical science. More than 200 scientific papers were published, and nine copyright certificates were obtained. Co-authored with Assoc. І.І. Papanova, wrote three scientific monographs. In 1997, V.I. Chernenko, Yu.E. Udovenko published the fundamental textbook “Electrical engineering and industrial electronics”. In 1979, the postgraduate study was opened at the department. Six Chernenko’s graduate students from the staff of the Department defended their candidate’s theses. V.I. Chernenko was the scientific leader of the doctors of sciences – M.G. Kropyvnyi and L.O. Snizhko. 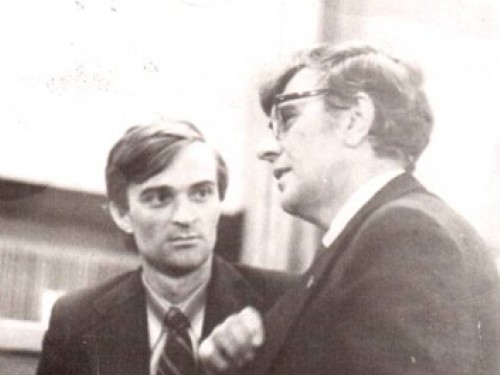 In 1991, the post of the Head of the Department was taken by V.I. Chernenko’s pupil, doctor of chemistry, professor M.G. Kropyvnyi. Under his leadership, the teaching laboratories of the Department continued to be modernized, and close scientific cooperation with the Alma-Ata State University was established. 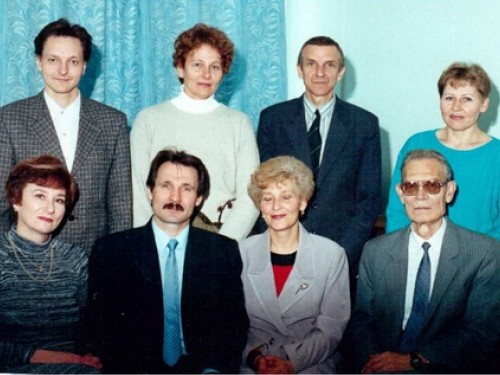 Collective of the department, 1998

Since 1994, the post of the Head of the Department is performed by V.I. Chernenko’s follower, candidate of technical sciences, associate professor S.G. Pavlyus. He continues research in the field of anode oxidation of valve metals. In cooperation with the Institute of Aviation Industry of VIAM, according to the results of research received a patent of the Russian Federation №2017872, class D05B57 \\ 10 /.

Since 1996 until now, S.G. Pavlyus heads the Department of electrical engineering and the foundations of electronics. The area of ​​theoretical research of the department in the electrotechnical direction has spread. In parallel, the Department improves the technologies of applying coatings by developing electric power systems “power source – electrolyzer”, developing energy-saving complexes in the system of power supply of enterprises. The systems of automatic switching of the AVR reserve and the distribution cabinets of a wide range with advanced protection levels have been developed and implemented at the enterprises of small business, work is underway to implement differential protection systems. Particular attention is paid to the development and implementation of systems for compensation of reactive energy and improvement of the quality of electric energy in USUCT, etc. The teaching and methodical work of the Department is aimed at improving the quality of training of specialists who have skills of independent work and is the most important task of higher education.

Specialists of the Department of Electrical Engineering are constantly working on the improvement of the University’s electrical engineering. The system of automatic protection of boiler-houses that are heated by student dormitories, the system of compensation of reactive energy is developed; the modern system of staging illumination of the assembly hall of the university was introduced, blocks of protection of unique electronic equipment. The Head of the Department is the chairman of the commission of the university for power engineering supervision.

Perspective directions of scientific activity of the Department are research and introduction of alternative power sources (solar, wind energy, etc.); development of systems of non-fuel energy; increase of efficiency of power plants. These problems are very relevant today due to the relative reduction of Ukraine’s fuel resources.