In 1967, under the direction of professor I.M. Khanin, a branch research laboratory for modeling coke ovens and chemical equipment for coke plants was established at the department. The staff of the laboratory and scientific and pedagogical staff of the Department developed new technologies for optimal heating of coke ovens, which ensure fuel economy and the production of high-quality coke, quench coke, waste utilization of coke and metallurgical industries. The new designs of high-performance devices: vertical coke ovens, scrubbers for cleaning coke oven gas, coke oven gas refrigeration, regenerators of the vacuum solution of vacuum-carbonate and arsenic-soda sulfur purification were explored and developed.

Significant work has been done on the research and development of universal devices and systems for dispersing and distributing liquids and gases in heat-mass-exchange machines of various designs. Professor I. M. Khanin created a significant scientific school for the study of chemical equipment of coke production plants, under his supervision more than 20 post-graduate students prepared and defended his Ph.D. thesis, he authored more than 270 scientific works, including 4 monographs and 51 copyright certificates. I.M. Khanin’s book “Methods of calculating the material and thermal balance of coke ovens” is translated into several foreign languages. The authority of the sectoral research laboratory was universally recognized. Professor I.M. Khanin was a member of the Scientific Council on coke chemistry at the State Committee of Science and Technology of the USSR, a member of the coke-chemical section of the Technical and Economic Council of the Minchormet of the Ukrainian SSR.

Since 1984, the head of the Department and the scientific director of the sectoral laboratory for modeling coke ovens and chemical equipment for coke plants has become Professor V.D. Barskyi. The scientific direction of the laboratory and the department is expanded by studies in the field of intensive effects of power fields and hardware-technological factors on chemical and mass-exchange processes. Together with OJSC Avdeyevsky Coke Plant, the staff of the Department and the research laboratory carry out large-scale research on the technology of waste recycling of plastics and waste automobile tires, develop methods for increasing the yield of valuable chemical products of coking coal. Almost all of the developments have been implemented at Ukraine’s coke plants, many of which have been used in the construction of factories in Russia, Finland, India and Iran.

The organization of the independent department “Processes and apparatuses of chemical technology” was entrusted to associate professor K.N. Shishkin, who held the post of Associate Professor of the Chemical Technology Department in the pre-war period, and during the evacuation period, a number of responsible positions in the coking plant’s works at the Magnitogorsk Iron and Steel Works.

The most important scientific direction of the Department of PAHT was the work on the study of the intensification of processes of coke production, pneumatic classification of dispersed materials and processes of dispersal of liquid mixtures. In 1965-1966 the assistants of the department AA Kotsuba, І.М. Polyanchikov, VP Repka, N.T. Pakhmura defended his PhD theses and were approved in the titles of assistant professors.

In 1970, the department of PACT was headed by a candidate of technical sciences, associate professor V.D. Parkhomenko Since then, significant strengthening of the material and technical base of the department, improvement of teaching and methodological work, and the expansion of scientific research began. The area of ​​the department was considerably expanded by building the third floor above the building of the department.

The staff of the Department began to work on a new scientific direction: “Development of scientific principles, technology and equipment of homogeneous and heterogeneous plasmochemical processes”. Under the scientific research were allocated areas of the first and partially second floor of the department. In the branch research laboratory of plasmochemical processes, unique installations for conducting scientific research on the common synthesis of cyanide hydrogen and acetylene in plasma, ferrite powders, catalysts, magnesium carriers, nitrides, carbides, zirconium dioxide, velvet and others were created. Over a short period of time, teachers and research fellows received dozens of author’s certificates for inventions, published hundreds of scientific articles in leading scientific journals, published 10 manuals and monographs. The scientific school of plasma chemists of Dnipropetrovsk was known not only in the former USSR, but also in many leading countries of the world.

On the basis of scientific research, intensive training of scientific and pedagogical personnel began. V.D. Parkhomenko, P.G. Soroka, Yu.I. Krasnokutsky, OA Pivovarov, P.M. Tsibulov defended his doctoral theses. Subsequently, they were awarded the academic title of professors. 25 candidates of sciences were trained in the scientific direction of the Department.

In 1989, the Department hosted the All-Union Workshop on Technology and Thermodynamics of Ferrites, and in 1991, the VIII Republican Conference on the Efficiency and Improvement of Processes and Apparatuses of Chemical Production was held. 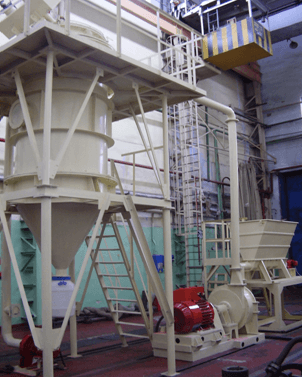 The IPP program has developed a plant for fine-scale biomass shredding, introduced in production at Bio-Fine SA (South Africa).

Since 2007, the Department was headed by professor M.V. Nikolenko. The scientific direction of the Department was supplemented by studies of industrial catalysts. New experimental facilities were created, studies on the development of composition, methods of synthesis and production technology of oxide and metal oxide catalysts of partial and complete oxidation of organic substances are carried out. A new approach to the problem of prediction and control of the properties of catalytic systems was developed, which consisted in the application of electronic characteristics of substances as parameters of correlations between their catalytic and molecular properties. New catalytic systems of conversion of methanol to formaldehyde and photocomposition of organic air pollutants were synthesized and investigated.

Since 2014, Oparin S.O., acting on the doctoral dissertation “Processes and equipment for obtaining materials for industrial and agricultural purposes from plant raw materials“, was appointed acting head of the Department.

Two graduate students of the Department are working on candidate theses: